Poll workers are the backbone of our election system, and Georgia needs more of them.

Georgia is ground zero for voter suppression and we’ve seen it happen before. Poll workers can make the difference between an election disaster like we saw in June, and a successful, safe election that Georgians deserve.

As the November 3rd general election rapidly approaches, Georgia is once again in need of poll workers who can assist with the voting process leading up to and on Election Day.

The June 9th primary elections were proof of the critical importance of poll workers, the first lines of defense for our democracy. Poll workers are trained to comply with election laws and make sure the election process is fair and effective for all eligible voters. 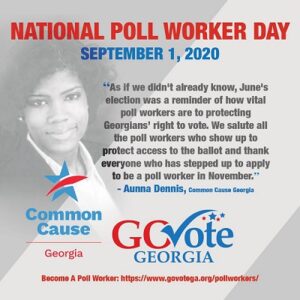 Despite the long lines, malfunctioning voting machines, and other issues many Georgians—particularly Georgians of color— faced during the primary elections, poll workers were there to solve issues as needed, report issues and make the voting process as safe as it can possibly be during a pandemic.

In many ways, the issues that were faced during the primary could have been prevented if more poll workers were on hand to help. That’s why Common Cause Georgia and the Georgia Election Protection Coalition are working to expand the number of poll workers across the state, in areas big and small, rural and urban, wealthy and underprivileged. Because we understand that every single community in this state deserves the opportunity to vote in free and fair elections and in the safest conditions possible.

The need is dire and time is running out. As the AJC recently reported, there are “over 5 million voters” expected in this year’s election and “election officials say they need over 20,000 workers statewide by Nov. 3.”

Georgia is ground zero for voter suppression and we’ve seen it happen before. Poll workers can make the difference between an election disaster like we saw in June, and a successful, safe election that Georgians deserve. In communities of color, where voter suppression runs rampant, trust in election officials may be low. In those areas, it is critical to have poll workers on hand that are from those communities and look like them to ensure their voting experience is a good one.

The qualifications to be a poll worker are simple: you must be 16 years old or older, live in the county where you want to serve as a poll worker, and communicate both in written form and verbally in English. Pay varies by country and workers do a variety of tasks including greeting and directing voters, troubleshooting technical issues, and ensuring ballots are securely turned in at the end of the voting process.

If there were ever a year to do your part, this is it. This is the time to stand up and help your community have the best possible voting experience for a critically important election.

Sign up to work as a poll worker by visiting https://www.govotega.org/pollworkers/.

The Georgia Election Protection Coalition is made up of organizations aimed at protecting and expanding access to the ballot box across the state of Georgia. Organizations that make up the coalition are: Georgia Votes, All Voting is Local-Georgia, Asian Americans Advancing Justice – Atlanta, Coalition for the People’s Agenda, Common Cause and Common Cause Georgia, Georgia Association of Latino Elected Officials, The Lawyers Committee for Civil Rights Under Law, League of Women Voters of Georgia, Georgia NAACP, The New Georgia Project, and the Southern Poverty Law Center