Data and Democracy: The Details Matter in Fair Redistricting

In Colorado and across the country, lawmakers and independent commissions are growing impatient at the delay in 2020 Census data and rushing forward using alternative data sources. Here's why this approach is so problematic.

With most of Colorado politics abuzz about redistricting, let’s take a moment to talk about the elephant in the room:  No one has the information they need to do this yet–at least not correctly.

As Colorado Common Cause’s resident data-nerd, I have spent the last days, weeks and months combing over the information and tools available to redistricting professionals and hobbyists and there is only one conclusion to draw: none of it is very good.  It is impossible to create accurate and fair maps using the information we have available today.

In a best-case scenario, this deficiency will have us spin our wheels designing maps that need significant re-drafting and re-evaluation when final Census data is released later this year.  But at our worst, we may allow premature voices and conclusions, using bad information, to establish themselves and unduly influence a process that is uniquely critical to our democracy.  Yes, drafting maps created on estimates may get the process moving and provide Coloradans with something to react to, but we need to be honest about the utility of such a map.

As a former military software engineer and strategic planner, I was taught early-on about the concept of “Garbage In, Garbage Out”.  It means if you put bad information into a system or process, you get a bad result out the back end.

Imagine if someone asked you to balance your bank account using a statement from 10 years ago and your annual budget estimates for food, gas, rent and utilities. It would be impossible. There’d be no way to account for every transaction you’d made in the past 10 years. But that’s exactly where we are right now with respect to redistricting.

Across the state, partisan lobbyists and special interest groups, like these guys, are pressing our independent commissions —and asking members of the public to do the same—to consider maps and draw conclusions about redistricting based on unreliable and outdated information.  That’s why more than 55 civil rights and good groups released a statement to warn against inappropriate uses of data from the American Community Survey (ACS) for the purposes of redistricting.  Allow me to illustrate:

Recently, I’ve been talking to a group of community activists in Northern Colorado. Mostly from Weld County, they were discussing which neighboring regions they felt most closely aligned with.  Unsurprisingly, given the shared school systems, healthcare and other services and growing  concerns over the now sprawling communities along the I-25 corridor, most looked west to their neighbors in Boulder and Larimer counties (Longmont, Loveland, Ft Collins) where in most areas, population growth has made the lines between counties indistinguishable.

But when it came to the task of drawing a possible new Congressional district for the region, we faced challenges. Using one of the more popular, free online mapping tools (DistrictR.org), was straightforward (and honestly fun), but based on now 10-year-old information. The result yielded a map looking something like this: 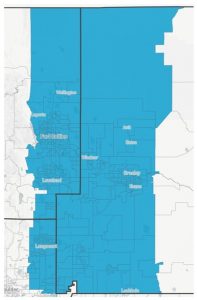 Using a popular online mapping tool, this potential Congressional district represents exactly 1/8 (12.5%) of the population of Colorado.  In 2010 terms, this was 628,000 residents.  Communities of color account for about 25% of the district.

But this information is over 10 years old.  What can we use to verify this is a reasonable district to propose in 2021?

Lobbyists and special interests proposed, and our redistricting commissions agreed, that we should draw preliminary maps using the data furnished by the Census Bureau through the American Community Survey (ACS) to provide a more representative picture of how population growth has impacted our state. But even this suggestion, while well intended, is fraught with challenges.

The 5-year estimates are more thorough and more available in all regions of the state but are based on an aggregation of surveys collected over a 5-year period.  Therefore, they always lag behind recent population trends.

Let’s take the example of the district Weld County residents were exploring.

Using the 5-year data, we can estimate that the district is now home to more than 737,000 people—representing more than 17.5% of the entire state.  Even using the less current data, it’s already too large for a single Congressional district.

And looking at the same district using American Community Survey 1-year data, it is impossible to know what the current population of this proposed district would be, as partial county population information (by census tract, voting precinct or otherwise) is not available.

We do know that in July 2020, the Census Bureau estimated that the population of Weld County alone grew by more than 20,000 people in a single year—making Greeley the 3rd fastest growing metropolitan region in the country.  Given this and similar growth up and down the Northern I-25 corridor, it would again be impossible to provide an accurate population estimate for the proposed district or any proposed district that includes Weld County.

Second, the ACS itself acknowledges that even these estimates are unreliable and particularly biased against BIPOC communities.  Every ACS data point (population, age, gender, race, etc.) comes with an associated margin of error.  This margin of error provides a measure of the degree of certainty for each estimate.  The larger the margin of error, the less precise/reliable the information.

Here’s an example using the information I gathered to support the Weld County team:

The 2019 ACS 5-year estimate for total population for Weld County is 305,345 people with an overall margin of error of +/- 7.7%.  That means the ACS itself acknowledges it may be off by 23,000 souls or more.  In Congressional redistricting terms, that’s not a huge number but it’s enough to bump a small town, like Erie, entirely out of the proposed district.

But in legislative redistricting terms, we’re now talking about as much as 1/3 of a Colorado General Assembly seat.  These levels of error margins are totally incompatible with the task of redistricting, particularly at the state level.

Okay, but there are margins of error everywhere, so doesn’t it all even out?  – No.

Sure, there are margins of error in every census tract, but they are not consistent across regions, counties, or even within particularly communities.

Across Colorado, there’s a significant deviation in the margins of error on total population among our counties.  When applied to our larger counties, we found potential errors of more than 50,000 people — that’s nearly an entire General Assembly seat.  When looking at our smaller counties, some of the errors are as high as 17%.  That means there’s a potential for errors in the population of our largest county that exceeds the total population of our 17 smallest counties combined.  How can any accurate map be drawn with such information?

Weld County is home to a significant immigrant population, among them a large community of African immigrants. But the margin of error in this growing black population is nearly 125%–meaning that while the ACS thinks there are about 3,643 black people in the county, it could be off by as much as 3,674 in either direction.  (Maybe there’s 7,300?  Maybe there’s none…) In essence, the ACS has no idea how many black people live in Weld County.

And what about Weld County’s large Latino community? The ACS reports that approx. 90,000 people in the county identify as Hispanic/Latino. But with a margin of error of nearly 24%, that means this community could actually be over 110,000 people, more than 1/3 of the entire county.

When we consider that the Federal Voting Rights Act and Colorado Constitution require the independent redistricting commissions to preserve minority communities as a protection against racial gerrymandering, these inaccuracies render this task, again, essentially impossible.

So where does that leave us?

No one at this point—no citizen, no party, no interest group, not even a commission—should be pushing any map—complete or partial–with proposed, whole district lines. And we must recognize that anything put forth is the fruit of a poisonous tree, the garbage out from a system that took garbage in.

The Colorado Supreme Court’s recent ruling defines the Commissions’ and their staff as having “sole constitutional authority to conduct all of the key tasks in the redistricting process,” including, “adjusting deadlines if necessary.” It would be better if the commissions used their broad authority to adjust their timelines so they can continue to gather feedback from the public on Colorado’s communities of interest AND provide time for all of our communities to have input on maps created using final Census data.

Important questions they should consider asking themselves and the public during this time:

These are the questions the commissions should be asking themselves and our communities in their upcoming road show. Now is not the time to haggle over specific district lines.  None of us are properly armed for that battle.  And anyone who suggests otherwise is at best naïve and more likely has ulterior motives.

So, let’s wait to obsess on the actual lines, to balance the books with the most recent statement if you will, until after the official Census is released.

Until then, let’s focus the public and the commissions on a conversation they do have the information and experience to conduct with care and purpose: one that defines our many varied and diverse communities in Colorado—who we are, why we’re important, where we live and how we can best position ourselves to hold our elected officials accountable over the next decade.

For more information about the Census & Redistricting, please contact us at: colorado@commoncause.org

DC Statehood – What it is and why it matters