Our Testimony in Opposition to Senate Bill 9

SB 9 does more to discourage participation in elections than it could ever do in furtherance of election integrity. 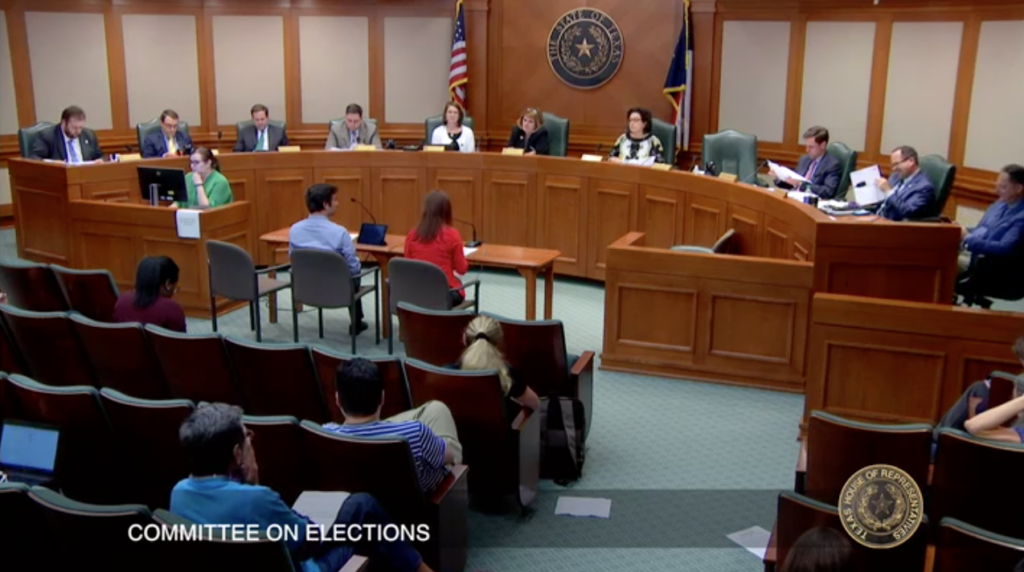 My name is Amanda Gnaedinger. I am here on behalf of Common Cause Texas testifying in opposition to Senate Bill 9.

SB9 fails to address real issues everyday Texans face when taking part in elections, and in fact exacerbates the most pressing of our election problems.

election activities. Large swaths of this bill create and increase penalties. In practice, SB 9 does more to discourage participation in elections than it could ever do in furtherance of election integrity.

Particularly, Section 1.06 eliminates the entire purpose of casting a provisional ballot by creating a fear of criminal liability. The tension between sections (d) and (e) of 1.06 mirrors lawsuits against public participation. This provision would practically allow for lawsuits to be filed against any voter who casts a provisional ballot. The voter must then affirmatively prove that they voted provisionally in order to release themselves from criminal liability. This kind of strategic lawsuit is designed to chill participation in important civic duties. Most Texans do not have the resources or legal knowledge to expediently dismiss a case brought against them, and in fact many would likely settle a dispute out of court despite an absence of any wrongdoing. There is simply no good way to remedy this provision of SB 9 without removing it entirely.

SB9 dissolves public trust in election integrity by allowing unrestricted access of our state’s voter rolls to the OAG. Our Attorney General presumed guilt of nearly 100,000 lawful voters just this year. We oppose unfettered access of our state’s voter list without just or even remotely reasonable cause for prosecution. Every registered voter in the state is at risk of unfounded accusations as it is clear that communication between agencies of the state and our voter rolls themselves are riddled with clerical, human, and data errors. This dangerous invasion of privacy by an agency authorized to bring criminal charges is akin to putting sunglasses on a police officer and directing them to look out for crime in a dark room with no windows.

Last, the bill allows rejection of voter applications for registrations that are “pre-marked.” If this provision were to go into effect, voter registration cards filled out and printed from the Secretary of State’s own website could be summarily rejected. There is no way for a voter registrar to have actual knowledge of how a card was filled out without being present at the time it was completed. This is the entire reason registrants must indicate on the form itself that to their knowledge the card was filled out correctly.

I urge you to join me in opposition to Senate Bill 9.