Every ten years, Connecticut redraws its federal, state, and local legislative district maps. This process is meant to ensure that as populations grow and change, every Connecticut voter can have equal representation and equal voice in government.

We’re fighting for fair, transparent, and equitable redistricting at every level — advocating for legislation like the Freedom to Vote Act to help end partisan gerrymandering, bringing Connecticut residents to testify at public hearings, and telling our mapmakers the story of communities across Connecticut.

In Connecticut, both congressional and state legislative redistricting is controlled by the state legislature. When partisan politicians control the mapmaking process, we’re especially vulnerable to gerrymandering — which is why it’s so important we push our lawmakers to be transparent and consider public testimony every step of the way.

The legislature needs ⅔ of each legislative chamber to support their maps for them to pass. If they fail to pass a plan, the process moves to a nine-member backup commission chosen by the majority and minority members of both houses. The Connecticut Supreme Court has original jurisdiction to challenge a plan or address legislative inaction.

With delayed Census data this year, the 2020 redistricting process will be controlled by the Reapportionment Commission.

Why Redistricting Matters for Connecticut

Four hearings were held across Connecticut during September. When the legislature missed the September 15 deadline to pass maps, the Reapportionment Commission was formed. The Commission will take public input and use that with the federal Census data to create draft maps. The finalized version of these maps are due by November 30.

Public hearings in Connecticut have already passed! As we enter the next phase of redistricting, please submit written testimony via email to reapportionment@cga.ct.gov. 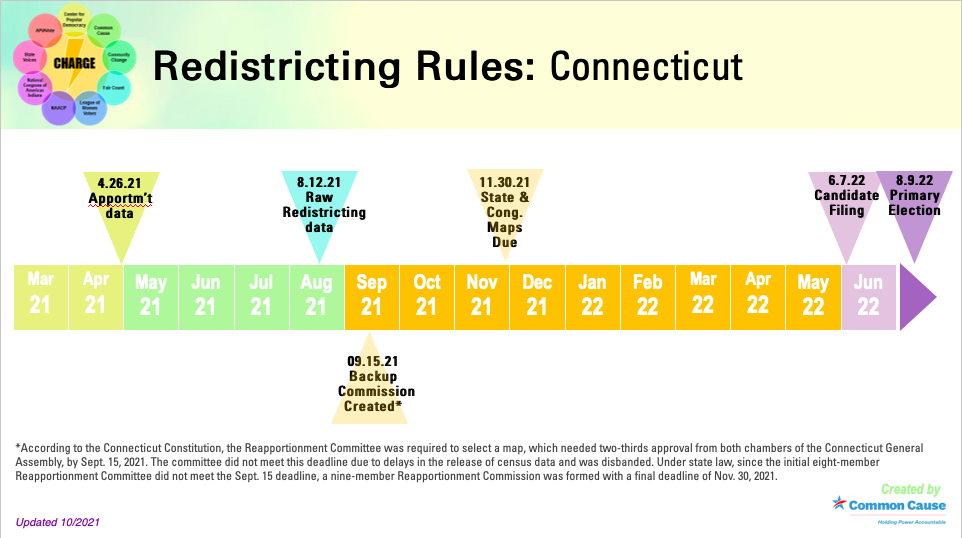 Use these resources to learn more about how you can get involved in fighting for fair districts and stopping gerrymandering in Connecticut.