Every ten years, California redraws its federal, state, and local legislative district maps. This process is meant to ensure that as populations grow and change, every Californian can have equal representation and equal voice in government.

We’re fighting for fair, transparent, and equitable redistricting at every level — advocating for legislation like the Freedom to Vote Act to help end partisan gerrymandering, bringing Californians to testify at public hearings, and telling our mapmakers the story of communities across California.

In California, both congressional and state legislative redistricting is controlled by an independent commission made up of citizens, not by the state legislature. This means that our mapmakers are more likely to base their maps on public input — not partisan ambition.

Statewide redistricting is controlled by a 14-member independent Citizens Redistricting Commission (CRC), consisting of five Democrats, five Republicans, and four people who are registered with neither of the two main parties. The CRC draws maps using public input and official Census data.

Certain areas also have their own independent commissions to manage redistricting within their city or county.

Why Redistricting Matters for California

Hearings are held across California from May through September to take testimony from communities of interest. When the Commission receives the federal Census data, they use it in combination with public input to create draft maps.

From October through January, the Commission processes the data, displays draft maps, and holds hearings to get public feedback to revise the maps. After that, the maps are finalized and certified.

The CRC is holding hearings throughout September to discuss public input. Join us at one of the following times, or visit https://www.wedrawthelinesca.org/meetings for a full calendar of events!

Join us at an upcoming hearing in your area:

To give testimony, please email VotersFirstAct@crc.ca.gov.

To submit Community of Interest testimony and map your community, please visit https://drawmycacommunity.org/. 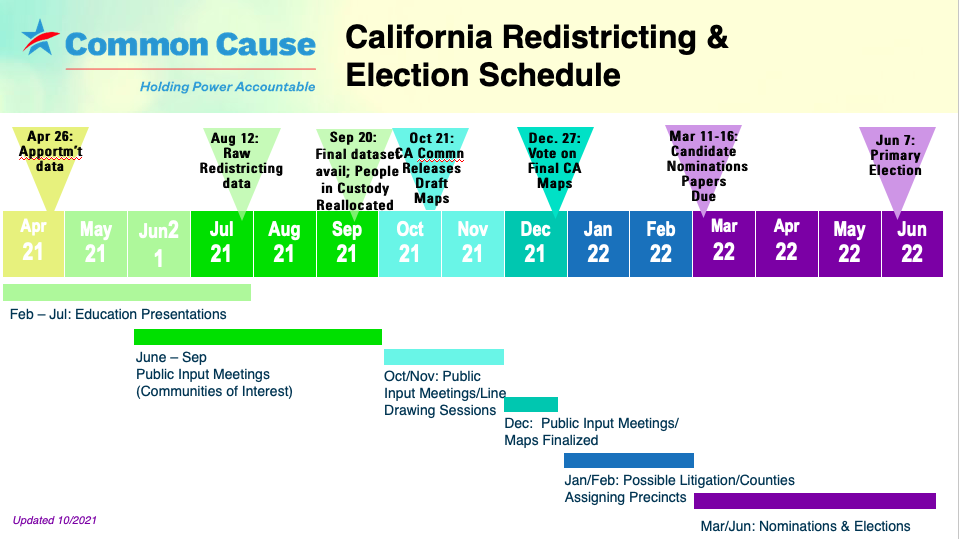