Secretary of State Frank LaRose has announced the formation of a bipartisan working group to examine ways to modernize voter registration--a first step towards implementing an Ohio version of automatic (or automated) voter registration (AVR). Automated Voter Registration saves time, it saves money, it increases the accuracy and security of voter lists, and--most important of all--it is a highly effective way to bring more people into our democracy.

Since 2015, fifteen states have passed legislation that automatically registers or updates voter registration when eligible citizens have contact with government agencies such as the Bureau of Motor Vehicles. While citizens can always opt-out, this process makes voter registration much more efficient: current information is electronically transmitted to election officials from other government agencies. It’s a win-win for officials and voters: Election officials verify voters’ eligibility, but they no longer have to enter information separately; voters who update an address when getting a fishing license, for example, will automatically have their voter registration updated as well. With better registration, more votes will be counted.

“If you are someone who is concerned about election integrity and preventing fraud, maintaining accurate lists is one of the best ways possible to prevent fraud,” said Secretary LaRose. “If you’re somebody who like me is concerned that absolutely every Ohioan can participate in the civic exercise of being a registered voter and participating in our elections, this is a great way to do that as well.” 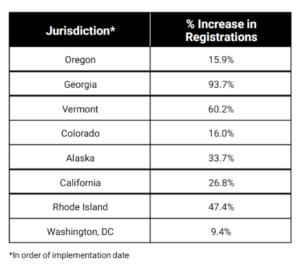 Registration can be a barrier to voting, and that’s a shame. A recent report by the Brennan Center for Justice found that Automatic or Automated Voter Registration (AVR) has markedly increased the number of voter registrations. These increases occurred in both red and blue states.

“This is not a Republican issue or a Democrat issue,” State Rep. Sweeney said. “This is an issue that’s good for all of Ohioans.”

In 2016, the state legislature took an important step forward when it passed online voter registration. Automated Voter Registration is the logical next move to as we continue to modernize and streamline Ohio’s elections: it saves time, it saves money, it increases the accuracy and security of voter lists, and–most important of all–it is a highly effective way to bring more people into our democracy.

You can help advocate for better, fairer, more efficient and secure elections in Ohio by signing our petition. Join us as we tell Ohio House Speaker Householder and Senate President Obhof that now it is time for the legislature to take up Automated Voter Registration! 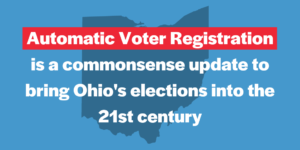 History of AVR and Implementation Information

Modernizing Voter Registration from the Ohio Secretary of State

Take the Pledge to End Gerrymandering