Latest moves from Huffman and Cupp 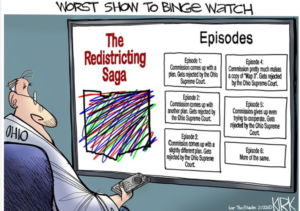 Last week, House Speaker Bob Cupp unveiled the General Assembly’s latest and possibly most outrageous maneuver to avoid drawing fair congressional districts. It seems they have no shame when it comes to reneging on their oath to abide by the Ohio Constitution and circumventing the will of the people. Check out Howard Wilkinson’s latest update on the redistricting saga.

Here are some quick facts to set the record straight.

We are Ohioans who have put our blood, sweat and tears into the fight for fair districts! Cupp and Huffman have another thing coming if they think these kinds of baseless accusations will make us give up now!

Another day, another redistricting deadline missed