A historic day in the fight for fair maps

On the same day that the U.S. Supreme Court heard the landmark NC gerrymandering case of Rucho v. Common Cause, citizens gathered in three North Carolina cities to call for nonpartisan redistricting reform 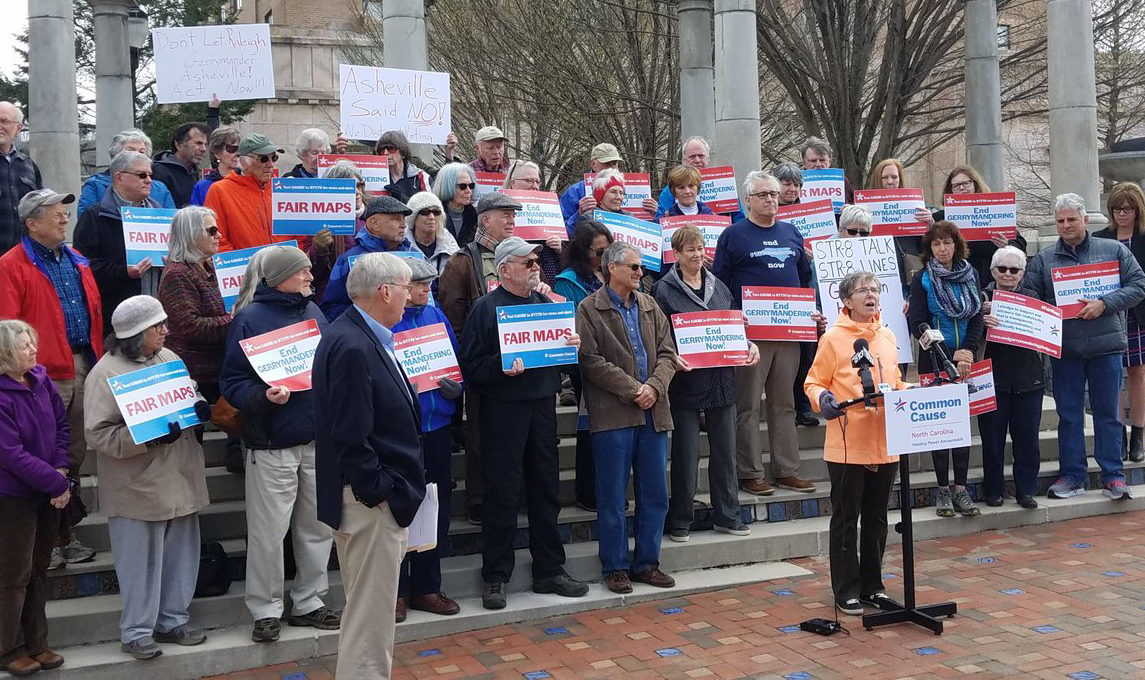 On Tuesday, the U.S. Supreme Court heard the landmark case of Rucho v. Common Cause, challenging partisan gerrymandering of North Carolina’s congressional districts. That same day, North Carolinians from across the state gathered in Asheville, Greensboro and Raleigh to call for fair voting maps.

In Asheville, residents highlighted how that city has been split into two gerrymandered congressional districts, diluting the voice of voters there. 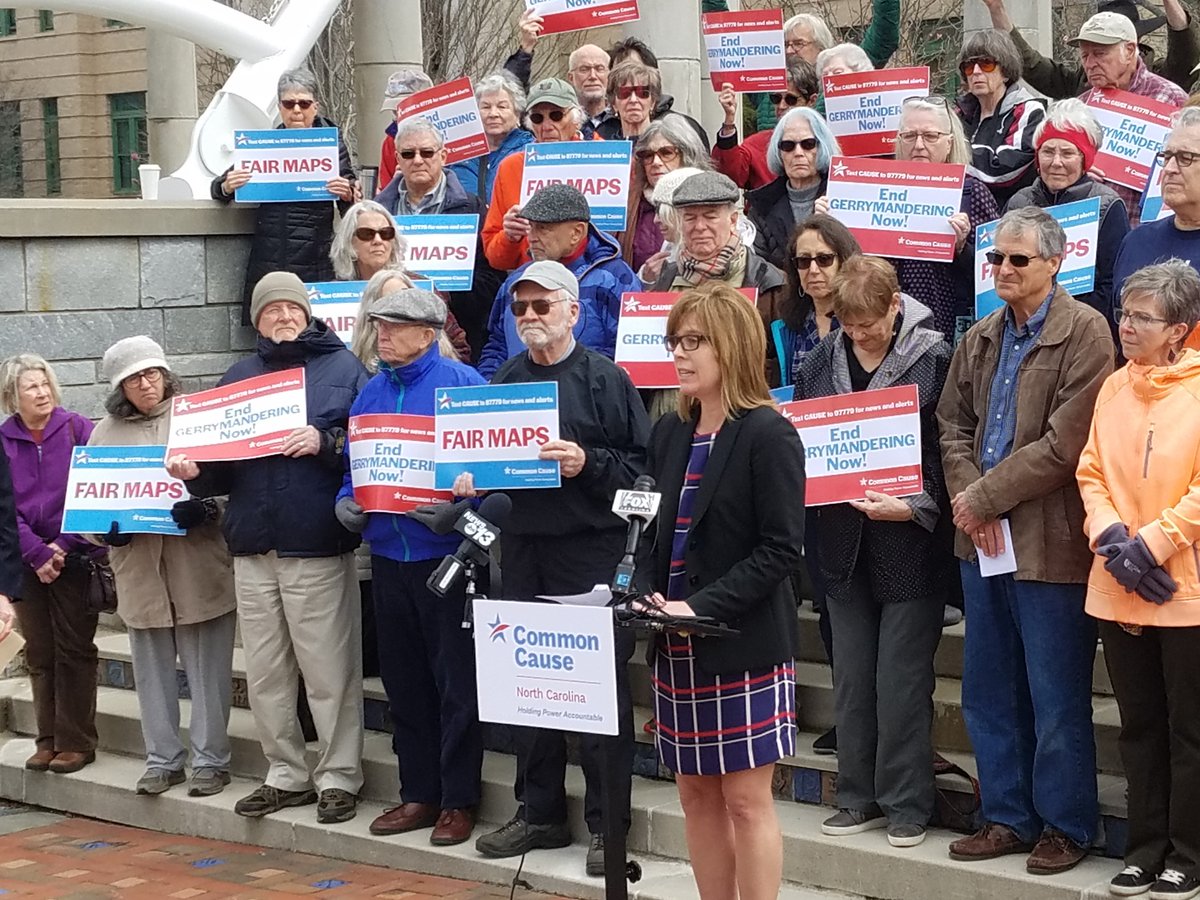 “Gerrymandering of federal, state and local elected offices by the legislature has all been for one blatant political goal, and that is to diminish the voice of the people,” Asheville Mayor Esther Manheimer said. “Gerrymandering is wrong, it is unconstitutional and it must end now.”

In Greensboro, students at NC A&T State University spoke out against gerrymandered congressional districts that divide their campus, which is the nation’s largest historically black college. 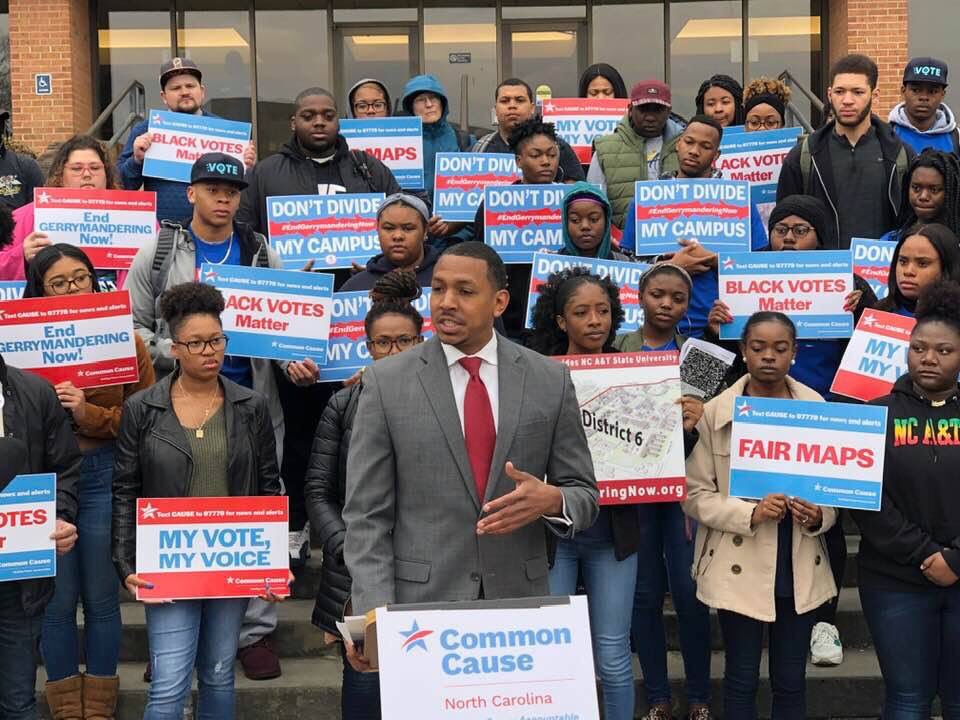 “North Carolina politicians have successfully fractured A&T students’ voting power by dissecting the campus into two gerrymandered congressional districts,” said Love Caesar, a student at NC A&T and a senior democracy fellow with Common Cause NC. “The students are here to say that no one will silence us. We will speak out, and we will stand up to end gerrymandering for this community and those alike.”

In Raleigh, citizens and state lawmakers gathered in front of the legislature to unite in calling for an end to gerrymandering.

“Today, as the U.S. Supreme Court hears our historic challenge against partisan gerrymandering, we ask the legislature to hear the redistricting reform bills that have been filed this session,” said Bob Phillips, executive director of Common Cause NC. “The problem of gerrymandering our state’s voting maps began right here at the legislature. But gerrymandering can also be solved here if lawmakers are willing to do the right thing for the people of North Carolina and enact common-sense reform.” 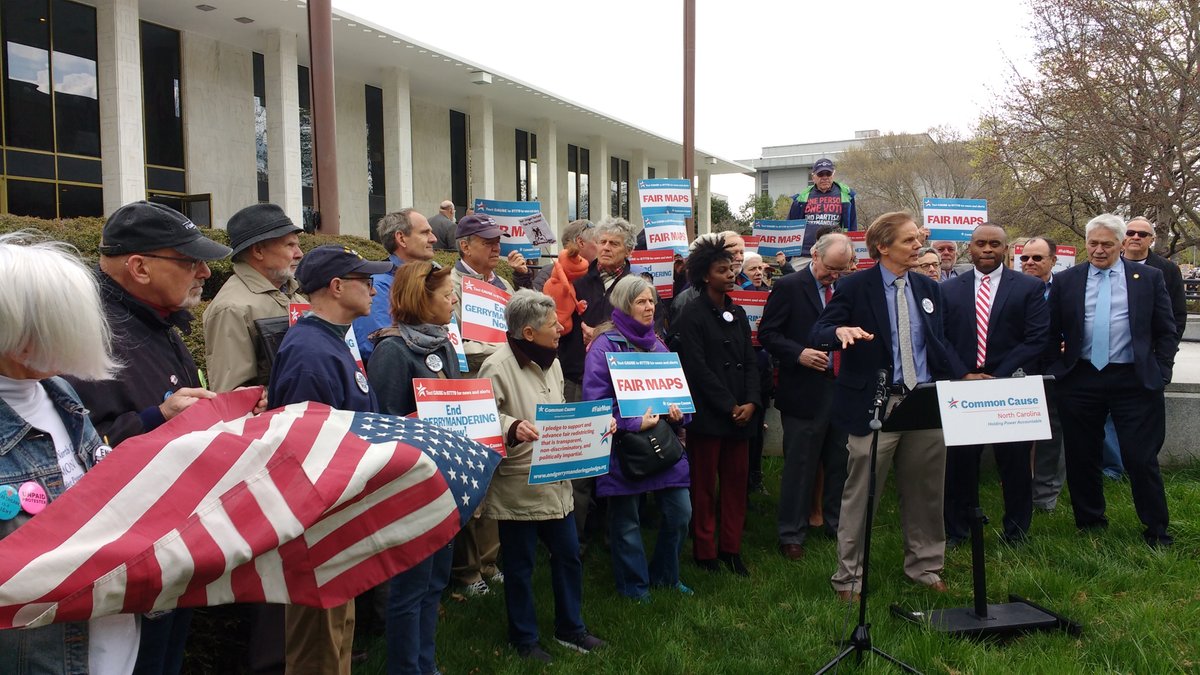 Bob Phillips, executive director of Common Cause NC, speaking in front of the legislature in Raleigh

Phillips noted that it has been over a month since House Bill 69 was introduced. That measure would end gerrymandering by having an 11-member citizens commission draw maps free from partisan politics, with robust public input and full transparency. The measure has 66 bipartisan sponsors in the NC House, a clear majority of that chamber.

House Bill 140 would also create a nonpartisan redistricting process and is likewise sponsored by a majority of NC House members. Weeks after the bills were filed, legislative leaders have still not given either redistricting reform measure a vote, or even a hearing.

“The public wants redistricting reform and so do a majority of lawmakers,” Phillips said. “We call upon the legislative leaders to let the debate begin. Let these redistricting reform bills be heard. Let the people have a say in how we create our voting districts in North Carolina.”

A lead sponsor on both HB69 and HB140, Rep. Robert Reives called for passage of reform.

“If you live in the wrong place, and you’re the wrong party, suddenly you don’t matter,” Rep. Reives said. “And people shouldn’t feel like that.”

Rep. Reives: We have a historic opportunity

"If you live in the wrong place, and you're the wrong party, suddenly you don't matter. And people shouldn't feel like that." Thanks to Rep. Robert Reives for his leadership in supporting bipartisan legislation in the NC House to end gerrymandering!Add your voice to the call for fair voting maps: CommonCauseNC.org

A solid majority of North Carolinians want impartial redistricting, as shown by a survey conducted in 2018 by Public Policy Polling. That poll found 59 percent of voters in favor of making the map-drawing process nonpartisan, with just 15 percent opposed to reform.

Over 300 locally elected leaders from 140 town and cities across North Carolina have signed a petition calling on the legislature to enact nonpartisan redistricting. And more than 100 North Carolina business leaders have joined the call for an end to gerrymandering.

On March 26: Stand Up to End Gerrymandering in NC