Miles Rapoport Steps Down: “Common Cause is an extraordinary organization and Karen Hobert Flynn will be a terrific president and is already an outstanding democracy reform leader.”

Washington, DC — Karen Hobert Flynn, a democracy reform activist and leader for more than three decades, including 25-plus years on staff and in state and national leadership positions with Common Cause, has been named the organization’s president.

“I’m excited and ready to lead Common Cause, connecting the values that make Common Cause unique in these polarized political times to the growing grassroots movement demanding democracy reform,” Hobert Flynn said.

Hobert Flynn, named to the post by the organization’s National Governing Board, is the first Common Cause president who once served as a state level director for the organization. She succeeds Miles Rapoport, who is stepping down as president and will serve as a senior advisor through September 30, 2016 to ensure a smooth transition.

“Miles Rapoport is a great leader with an impressive track record that includes his two-plus years at Common Cause,” said National Governing Board Acting-Chair Martha Tierney. “Miles challenged us to connect with the people our work impacts and shine light not only on secret money, but also the people harmed by the policies that money buys,” she added.

“I’m proud of my two-plus years with the talented democracy reformers at Common Cause and the work I led to bring the national and 35 state offices closer together, modernizing core systems, and reminding people that even process organizations are about people,” Rapoport said. “Karen Hobert Flynn is the perfect choice as Common Cause’s work has never been more important, and the stakes for our democracy have never been higher.”

Tierney noted the board conducted a thorough and deliberative process, after which the board’s vote was unanimous. “We conducted a national search just a little more than two years ago. Even if we didn’t know Karen Hobert Flynn, her experience, accomplishments, and leadership fit the criteria we set then and now. We’re thankful and fortunate she built her record of success at Common Cause.” Tierney said. 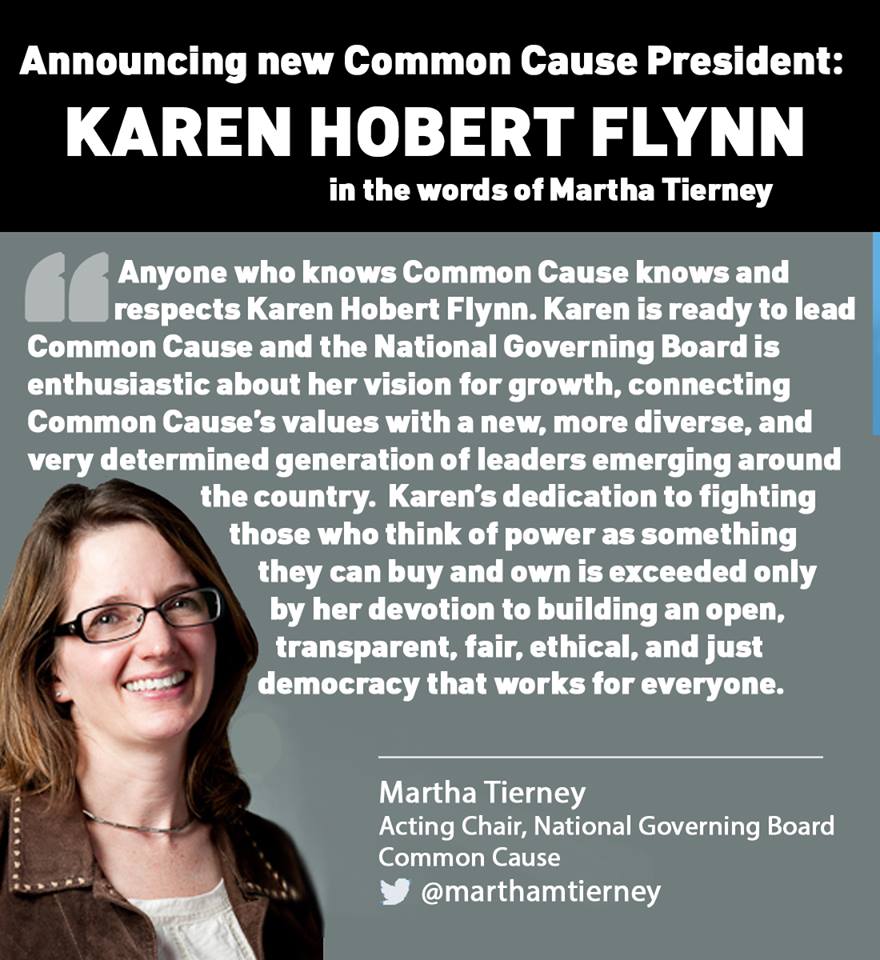 “Karen’s roots in Common Cause mean she will do what John Gardner always envisioned and make sure Common Cause’s work is relevant to issues of today, grounded in the core values that govern our democracy. She will ensure we are as innovative in our organizing tactics with new tools and technology to connect and empower voters, as he was in starting the organization 46 years ago,” Tierney said.

Common Cause is the nation’s original and largest non-partisan, good government watchdog. The organization promotes a comprehensive agenda of democracy reforms to reduce barriers to participation, including small-dollar donor based campaign finance systems, online and automatic voter registration, impartial citizen redistricting commissions, media laws that protect the free flow of information, and works for a more reflective democracy that truly represents the rich diversity of 21st Century America.

Former Common Cause President Fred Wertheimer (1981-1995), praised Miles Rapoport for his leadership of Common Cause and for his many years as a national leader of the public interest movement. Wertheimer has known and worked with Hobert Flynn for more than two decades.

“Karen Hobert Flynn embodies the spirit and commitment John Gardner envisioned when he founded Common Cause in 1970. She is one of the most substantively knowledgeable, strategically skillful, grassroots-oriented national reform leaders,” Wertheimer said. “Karen has led Common Cause’s many political reform efforts at the national level and has guided state activist campaigns all over the country in pursuing campaign finance, voting, and redistricting reform efforts. Karen personally led the successful battle in Connecticut to create its comprehensive citizen funded election program for state races that is a model for reform nationwide.” 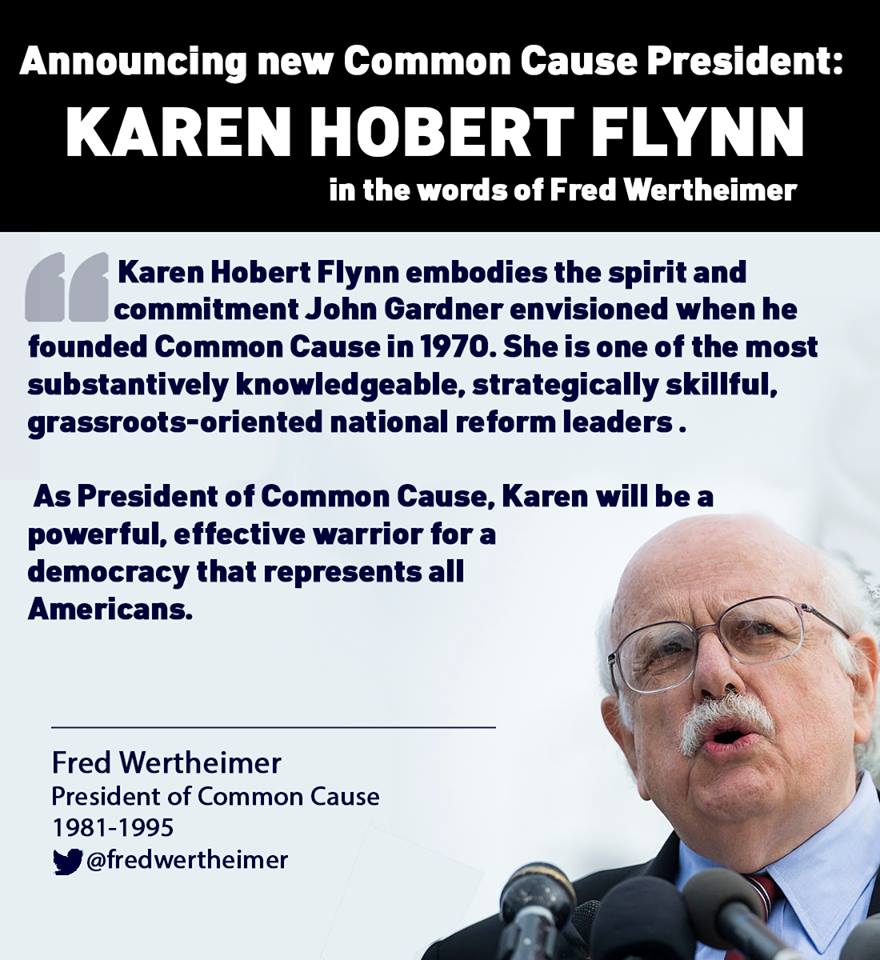 Wertheimer added, “As President of Common Cause, Karen will be a powerfully effective warrior for a democracy that represents all Americans.”

Hobert Flynn is a principal architect of Connecticut’s Citizens’ Election Program, which established small-dollar donors as the financial center of state politics, which shifted power away from lobbyists and back toward people. The program has given the state a more diverse legislative body, able to deal with issues that matter to constituents, not wealthy special interests. As Chair of Common Cause Connecticut, she led the fight to pass the law with a coalition 50 organizations, now in its fifth election cycle and more popular than ever, with 74% of candidates participating.

“When I first ran for a seat in the House, conventional wisdom was that I would not win. That win and the fact that I am now a Senator are owed to Connecticut having the Citizens’ Election Program,” said Sen. Gary Winfield (D-New Haven). “In my first year in the House I introduced legislation to repeal the death penalty, and in my first tem in the Senate I championed reforms to policing including body cameras – not issues freshmen in either chamber could do in the big money system. The balance of power completely shifted back to the people, so politicians are working with, and listening to, their constituents.”

“Karen Hobert Flynn and Common Cause Connecticut made that power shift happen,” Winfield said. “They understand democracy is how we win rights and create opportunity.”

Former Governor Jodi Rell, (R-CT) who signed the groundbreaking legislation in 2005 said, “Karen Hobert Flynn is a gifted leader with a tireless work ethic who gets the hard things done. She has a vision for what she wants to achieve, and pursues that vision with passion. Having Karen in such a powerful position, with her high standards, will ensure that the hard work and goals of the Connecticut Citizens’ Election Program stay in place.” 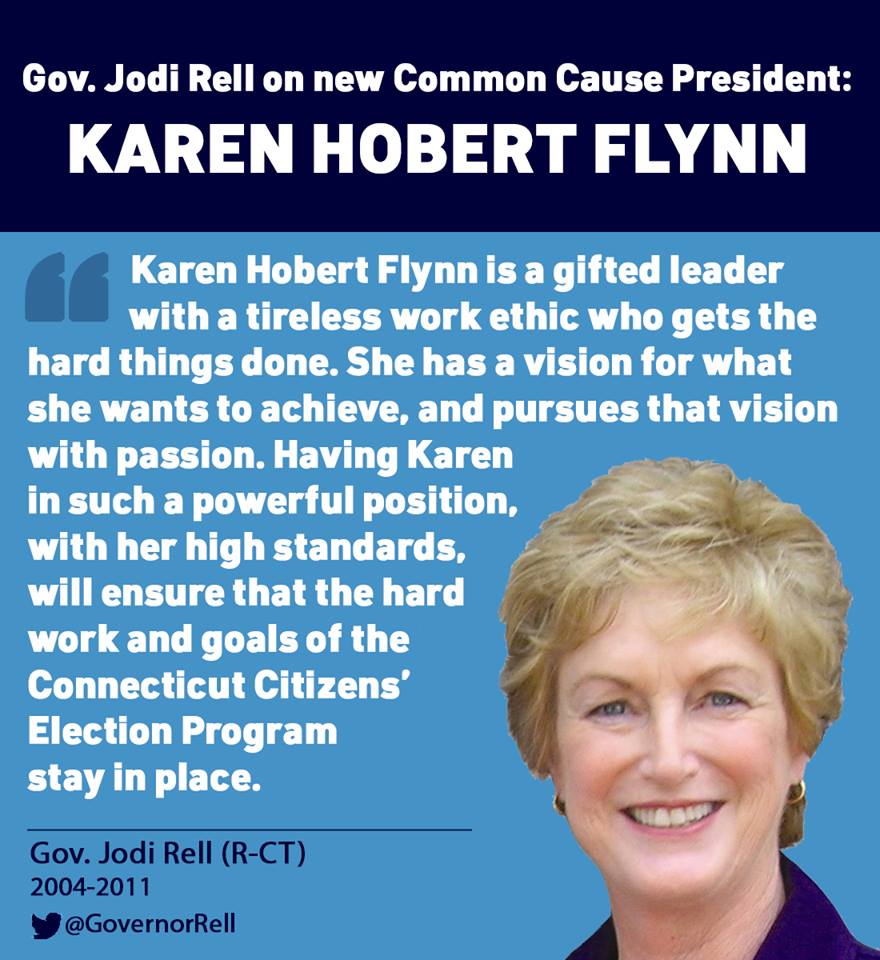 Hobert Flynn said she is motivated to do this work because, “Like every other parent, Rob and I want the best for our boys, and that means preserving a democracy where every American family has a voice and a vote on the policies that will impact their future.”

In addition to Common Cause, Karen worked at Public Citizen and Center for Science in the Public Interest and as Field Director of the Long Term Care Campaign, funded by AARP, Families USA, and the Alzheimer’s Association.

“What excites me the most about this moment is that Americans are engaging in democracy reform in growing numbers and that the generation just coming into awareness of their political power, the New American Majority — more diverse, less ideological, and more engaged — is prioritizing democracy reform,” Hobert Flynn said. “Our country’s emerging leaders embrace Common Cause’s non-partisan approach with new energy and vision that gives me hope for the future.

“In their enthusiasm, I see myself walking into my first job at Common Cause 25 years ago and finding my life’s calling. Like the leaders of Common Cause then, my commitment is to work with the generation learning leadership now; together we will build a 21st Century democracy that works for all Americans, not just wealthy special interests,” Hobert Flynn said. “The next generation seems to know what our founder John Gardner knew, that people are the only true power in our democracy, but we must organize to exercise that power,” she said. 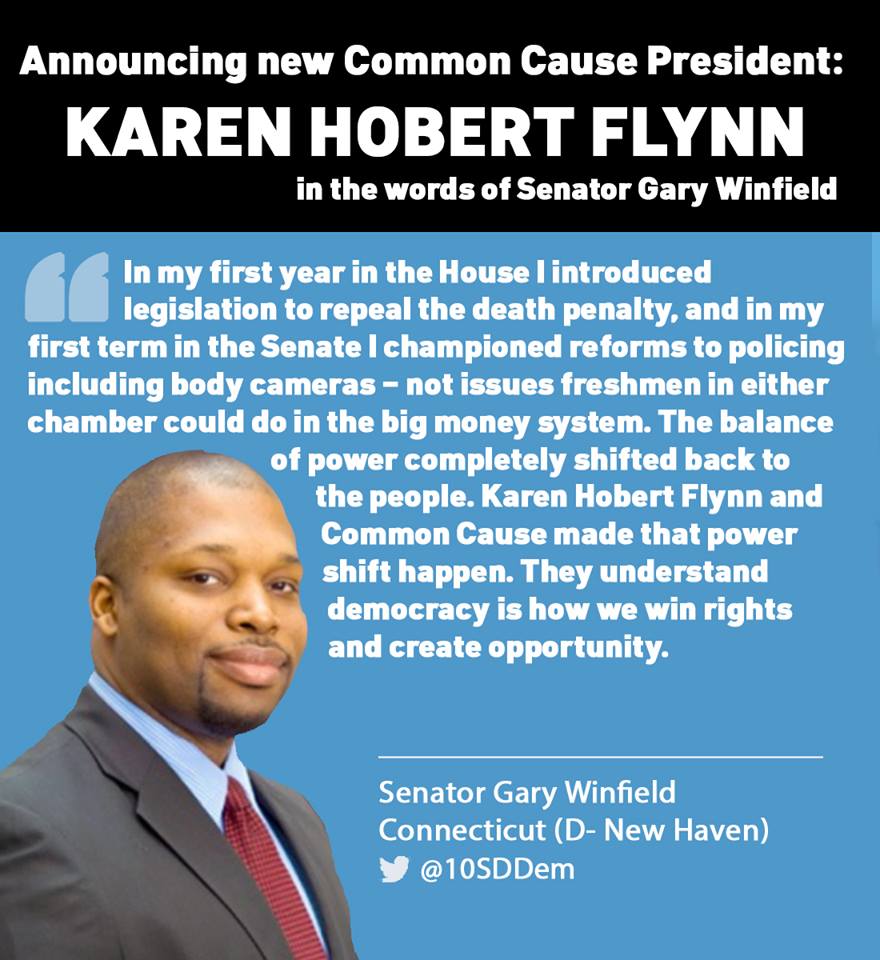 Tracing their friendship to their days in Connecticut politics, Hobert Flynn said “Miles Rapoport is my friend of many years, and many more to come. He is a deeply passionate, empathetic, and dedicated leader. In the short-term, I’m grateful we will continue working together to ensure a smooth transition as he serves as Senior Advisor. From his work in the Connecticut Legislature and then as Secretary of the State, to his leadership at Demos and Common Cause, Miles’ life is a commitment of service, lifting people up and taking on any fight to beat those who keep others down.”

Hobert Flynn’s career at Common Cause spans more than half of the organization’s nearly 50 years, which helps her shape the agenda and strategy it pursues today. In addition to money in politics, Common Cause works to reduce barriers to participation as a recognized leader for impartial redistricting commissions to end gerrymandering. In Florida, where state advocates were part of a coalition that challenged and won court-ordered redistricting this year to correct partisan gerrymandering, there are more competitive political races in the state than they’ve had in decades.

Long a leader in election protection work, expanding ballot access and removing obstacles that prevent people from voting, from restoring voting rights for formerly incarcerated people to leading the fight for the first Automatic Voter Registration laws, Common Cause is committed to modernizing and simplifying the registration process so it is accessible and secure.

Hobert Flynn connects Common Cause’s rich history to the challenges we face today, and the vision for a 21st Century democracy that works for everyone. Historically Common Cause:

"Hate and Oppression of Any Group Impacts Us All"