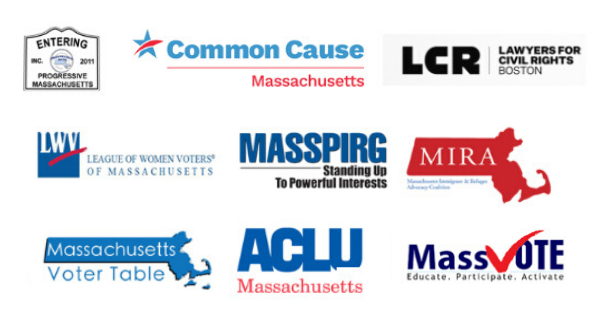 The bill, S. 2608, was passed yesterday and was signed by Governor Charles Baker last night.

“Yesterday’s bill is a strong first step. However, there is no guarantee that the coronavirus crisis will have receded by September 1, when Massachusetts state primaries are scheduled, or even for the November elections,” the groups said. “The Election Modernization Coalition urges the Legislature to recognize that this crisis is of indeterminate length, and that we must also act quickly to ensure that the fall’s elections take place as scheduled, maximize participation, and maintain public health. To that end, the Legislature must protect the ability of all eligible voters to cast ballots from home in all elections, and ensure that in-person voting is as safe and participatory as possible.”

The full statement is below.

The unprecedented outbreak of coronavirus has required Massachusetts officials to respond to many urgent issues surrounding public health, the economy, and more. Yesterday, the Legislature stepped up to the plate to address one of these core issues: protecting the integrity of Massachusetts’ spring elections in this time of a global pandemic.

On Monday, the Legislature passed and today Governor Baker is expected to sign into law an emergency bill that will allow more voters to participate in our elections from the safety of their own home by expanding absentee and early voting by mail in the Commonwealth. The bill also allows cities and towns to postpone spring elections, some of which would have begun next week, until June. Related legislation postpones four state legislative special elections until May and June.

This delay is critical to enable all eligible voters to participate in our democratic process.  It will allow election officials to prepare for a surge in mail ballots.

Yesterday’s bill is a strong first step. However, there is no guarantee that the coronavirus crisis will have ended by September 1, when Massachusetts state primaries are scheduled, or even by the November elections. The Election Modernization Coalition urges the Legislature to recognize that this crisis is of indeterminate length, and make preparations for the fall elections well in advance. In order to ensure that the fall elections take place as scheduled while maintaining public health and public participation, the legislature should act to expand absentee balloting rules to allow all eligible voters to cast ballots from home, and ensure that in-person voting is as safe and participatory as possible. Expanded absentee voting should include sending ballots to all voters, re-paid postage for responses, and counting ballots postmarked on Election Day. Necessary in-person voting reforms include expanding in-person early voting windows and implementing procedures that create social distancing such as drive-in voting.

The Legislature should also build on the precedent that was set by yesterday’s legislation and reduce the voter registration cutoff for all elections, not just for this spring’s. Election Day voter registration, already law and working well in 21 states, is the gold-standard reform and should be adopted here in Massachusetts.