Ballot Question A asks whether Baltimore County voters want to establish a Citizens' Election Fund, also known as a fair elections program, in the county. There are four main reasons to vote Yes for A: keep big money out of politics, expand opportunities to run for office, give everyone a voice, and encourage more participation in our democracy. 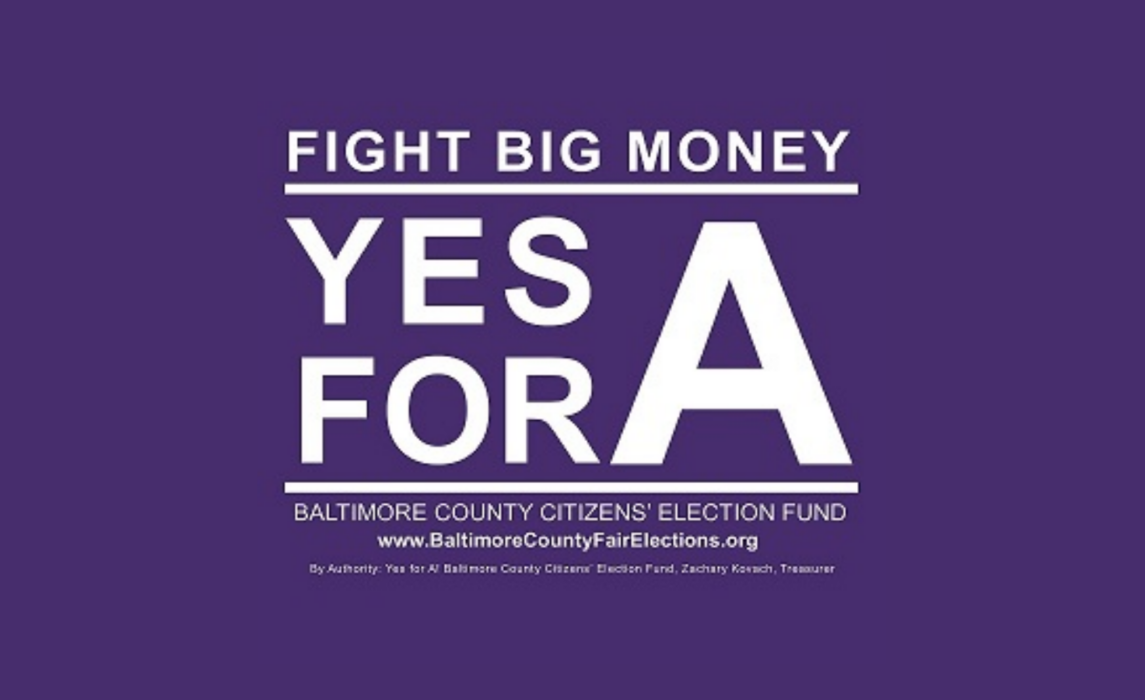 This November, candidates are not the only thing voters will find on their ballots.

In Baltimore County, voters will be presented with ballot Question A, which asks whether voters want to establish a Citizens’ Election Fund, also know as a fair elections program, in the county. There are four main reasons to vote Yes for A in Baltimore County: keep big money out of politics, expand opportunities to run for office, give everyone a voice, and encourage more participation in our democracy.

A fair elections program is an opportunity for all sizes of government to lift up the voices of everyday voters so they can be heard over the ever-increasing influence of wealthy special interests. It provides an incentive for candidates to participate in a new system of fundraising. Fair elections program participants are not allowed to accept large contributions, or any contributions from corporations or PACs. In return, small-dollar donations are amplified so that even the smallest donation can have a huge impact.

Baltimore County should take advantage of this reform because it increases participation on both sides of the campaign. Approving Question A will help decrease the costs of campaigns and put the power back into the hands of the people. It is a win-win for both voters and candidates.

By focusing more on how many voters they are reaching — and less on raising money — candidates can feel free to spend more energy on other aspects of their campaign outside of cost. Additionally, voters donate because they know that even a little bit can go a long way, and this donation is an investment that more tightly connects them to the campaign, raising interest.

In Baltimore County, candidates for county council are raising over six figures to be competitive, and candidates for county executive are raising over seven figures to be competitive. When the cost to run for office is high, the concern is that candidates often need to rely on mega donors or corporate interests to be competitive. As a result, a few wealthy people and corporations end up having a major influence on who runs for office. Thus, it’s the wealthy folks’ issues that are prioritized. A fair elections program would provide candidates with limited campaign funds if they agree to only accept contributions from small donors, lowering the cost of running a campaign. More importantly, a fair elections program will reduce the influence of large donors and empower small donors.

A fair elections program will also work to provide a voice for often unrepresented and undervalued voters and candidates in our communities. Anyone who has seen the massive amounts of funding required to impact local politics may be discouraged from running or donating to accurately represent their community. This fair elections program allows and encourages those people to elevate their voices, not only as vocal candidates, but as inspired voters.

Instead of garnering representation through far-and-away candidates who happen to have deep pockets, this fund will empower grassroots candidates from all communities to represent their neighbors, friends, and community leaders. Local politics will become truly local.

Montgomery County is the first and only Maryland county to have an election with candidates participating in the program, in 2018. The program was a success and showed that campaigns that focused less on fundraising large amounts and more on small donor participation were still able to compete with traditional campaigns. In Montgomery County, candidates in the program received 96% more contributions than candidates not in the program; and 98% of the contributions were made up of small donors, reducing the influence of big money in the political process. This is an outcome we could see in Baltimore County if Question A is approved by voters.

Samay Kindra is the Chair of the Yes for A! Baltimore County Citizens’ Election Fund campaign.

Tierra Bradford is the Policy Manager for Common Cause Maryland.