Williams-Yulee Is Not About Free Speech, It’s About Judicial Integrity

Williams-Yulee Is Not About Free Speech, It's About Judicial Integrity

The Supreme Court is hearing a case tomorrow that threatens to further politicize the bench at a time of skyrocketing spending in judicial races.

The Supreme Court is hearing a case today that threatens to further politicize the bench at a time of skyrocketing spending in judicial races. Fittingly, this week also marks the fifth anniversary of Citizens United, the case in which the justices held that because money is speech, corporations have a right to unlimited independent spending in elections. In Williams-Yulee v. The Florida Bar, argued today, the justices will decide whether candidates for state judgeships have a constitutional right to personally solicit campaign funds for their election. However, Williams-Yulee is about much more than campaign spending and free speech. It is about ensuring litigants due process and a fair day in court, and how much states can do to prevent corruption and foster public trust in the judiciary.

Williams-Yulee arises from a Florida Supreme Court ruling upholding the state’s bans on such solicitations. Each of the four state supreme courts that has considered this issue — Arkansas, Florida, Maine and Oregon — has found in favor of the limitation. But the federal circuit courts (whose judges have lifetime appointments and so do not have to engage in fundraising) are split. The vast majority of the 39 states in which judges are chosen by the voters have similar restrictions, and they all hang in the balance on the outcome of this case.

Regulation may seem like a no-brainer, but the issue is more nuanced than it appears. While Florida’s judicial code, like the American Bar Association’s Model Code of Judicial Conduct, prohibits personal solicitation, it allows campaign committees to raise money on candidates’ behalf. The key question is the effect, or at least the perceived effect, of having a judicial candidate make the pitch directly.

If you had to appear before a judge, what would be your personal calculus if your attorney accepted or refused to accept a judge’s direct, in-person request to donate to his or her campaign? What if the opposing attorney or the opposing party contributed but you refused the request? How would this influence the outcome of your case, or at least your perception of the administration of justice? Retired Supreme Court Justice Sandra Day O’Connor cautions that “[i]f both sides open up their spending, mutually assured destruction is probably the most likely outcome. It would end both judicial impartiality and the public perception of impartiality.”

Justice Anthony Kennedy, a frequent swing vote on the Supreme Court, has written that, “The power and prerogative of a court to perform [its] function rests, in the end, upon the respect accorded to its judgments. The citizen’s respect for judgments depends in turn upon the issuing court’s absolute probity. Judicial integrity is, in consequence, a state interest of the highest order.”

We have seen what happens when judges benefit from big money in their campaigns. In Illinois, Supreme Court Justice Lloyd A. Karmeier is under considerable scrutiny for refusing to recuse himself in a case in which he was the decisive vote to overturn a billion-dollar jury verdict against a company that contributed at least $4.8 million to his 2004 election. In West Virginia, Justice Brent D. Benjamin refused to recuse himself from a case involving a corporate executive who had contributed $3 million to his election. Justice Benjamin’s vote helped the executive win an appeal pending on a $50 million damage award for fraud and contract claims. Not a bad return on investment. And in North Carolina, where Duke Energy is fighting litigation stemming from the third-largest coal ash spill in history, the company has contributed hundreds of thousands of dollars in the state’s two most recent supreme court races.

Actually, Florida’s limits on judicial solicitations are a direct result of extensive judicial corruption in the 1970s that led to the resignation of four of the seven justices on its supreme court. Several justices attempted to fix cases on behalf of campaign supporters. Another resigned after he was filmed gambling on the dime of a litigant with a pending case before the high court. Others allowed themselves to be lobbied by an attorney with a case before the court, and even allowed the attorney to ghostwrite the draft opinion for the case.

The states have spoken almost uniformly in support of solicitation bans like Florida’s. The Supreme Court should respect that common-sense call to restrict fundraising by judicial candidates in order to preserve judicial independence and the public’s confidence in the judiciary. 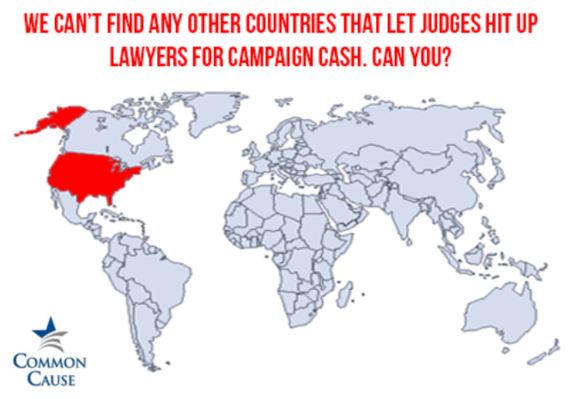 Can You Hear Us Now?