What Part of “Liberty and Justice for ALL” Don’t People Understand?

Slate's Jamelle Bouie lays it out plain as day, we live under minority rule engineered by changing the rules of our elections through vote suppression and gerrymandering targeting certain populations. It's long past time we talk about it. 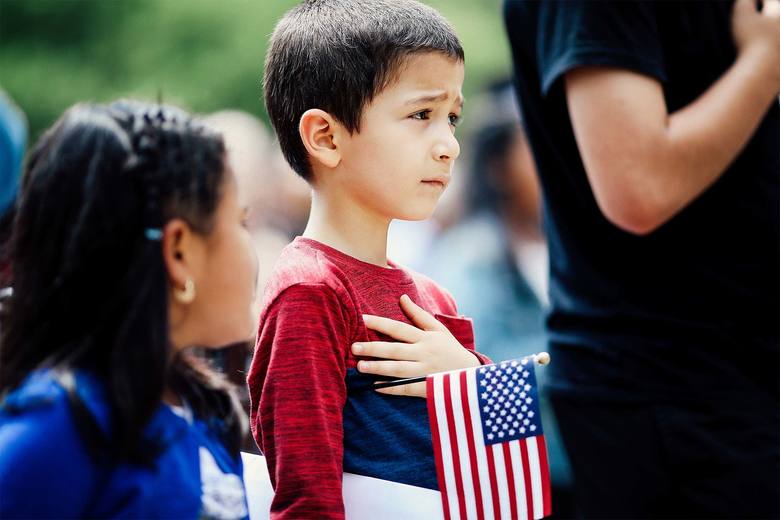 Should these children have a voice and vote in their future when they grow up?

It’s hard to keep up with the nonstop onslaught of news coming at us these days, even when that’s part of your job. So when I read Jamelle Bouie’s excellent piece in Slate today, White Fight, and tripped over something hadn’t heard the Trump Administration was doing, it reminded me of my youth when my step-mother, a genealogist who was involved in the Daughters of the American Revolution, baked cupcakes and had me stick tiny American flags in each of what seemed like hundreds she made.

The cupcakes were for a naturalization ceremony, the searing in and celebration of new Americans. These are the immigrants you might hear politicians describe as those who “Played by the rules, they got in line and stayed in line,” and after completing the requirements for naturalization, were finally realizing their dream.

If you’ve never been to one of these ceremonies there are two feelings I remember after the first I attended:  1) These people from all around the world chose to be here and chose to go through a fairly lengthy and arduous process to have more opportunity, a better life, and a voice and a vote in the policies impacting their family and community; and 2) They are better Americans than many people born here, they took the time to learn and appreciate the ideal America is and they have an appreciation for places that do not provide as much opportunity or ability to participate in self-governance.

When I tripped over the fact the Trump Administration wasn’t just ripping children from the arms of asylum-seeking parents but is actually targeting already naturalized citizens — the one who “played by the rules” — I was dumbfounded. But why should that be any different than the rest of Bouie’s piece, about how the rules of our democracy are being re-written to preserve minority rule by a white, mostly male, ruling class.

In research the Women’s Donor Network issues annually since 2014, they’ve looked at the number of people holding various offices from the County level to the Presidency. The numbers, all available at WhoLeads.US speak for themselves:

Is it any wonder we all feel like politicians don’t listen to the people once they get in office? When those who are supposed to represent our interests, but they don’t because they don’t take time to understand the concerns of different constituents, we have a systemic and fundamental problem with our democracy and we must correct it.

We must work together, across partisan lines and across racial, ethnic, and cultural divides that some politicians exploit in order to frighten people an suppress certain votes.

When I was sticking those flags in the cupcakes, my step-mother would tell me the genealogy she’d done on our family, and my grandparents would tell stories their parents shared about “the journey” in steerage, not above, two family members died at sea and their long trek that finally ended in a small farming town in North Central Kansas of about 2000 people. The Swedes and Norwegians immigrants settling in that area were often targets of derision for those who came before and, as often happens, even turned on each other with insults trying to curry favor with the power structures in their new communities.

America is changing and should. We must commit to removing barriers that deny to many women and people of color the opportunity to run for public office and the good news is there are solutions that are already working in some communities, like small-dollar donor matching programs that give candidates with money or access to it the ability to run, be heard, and win, or impartial citizens redistricting commissions that draw fair districts and put a stop to gerrymandering.

Majority rule with protections for the minority is a concept familiar to Americans who studied their civics in 5th grade, so why we should not pretend that minority rule, and the anti-democracy barriers erected to suppress votes and make it difficult for certain people to seek office, are the same thing. Majority rule we can celebrate together knowing no one will win all the time. Minority rule we should repudiate before it’s too late. It may work in Russia, but it doesn’t reflect the America I grew up in.

'I've been preparing my whole life'