We the People Will Not Allow ALEC to Undermine Our Democracy

Join Common Cause and our allies tonight outside of the Trump International Hotel when ALEC's corporate lobbyists will be strolling into the gala. Please sign up to attend at the links below and urge others to come by sharing on your social media networks. 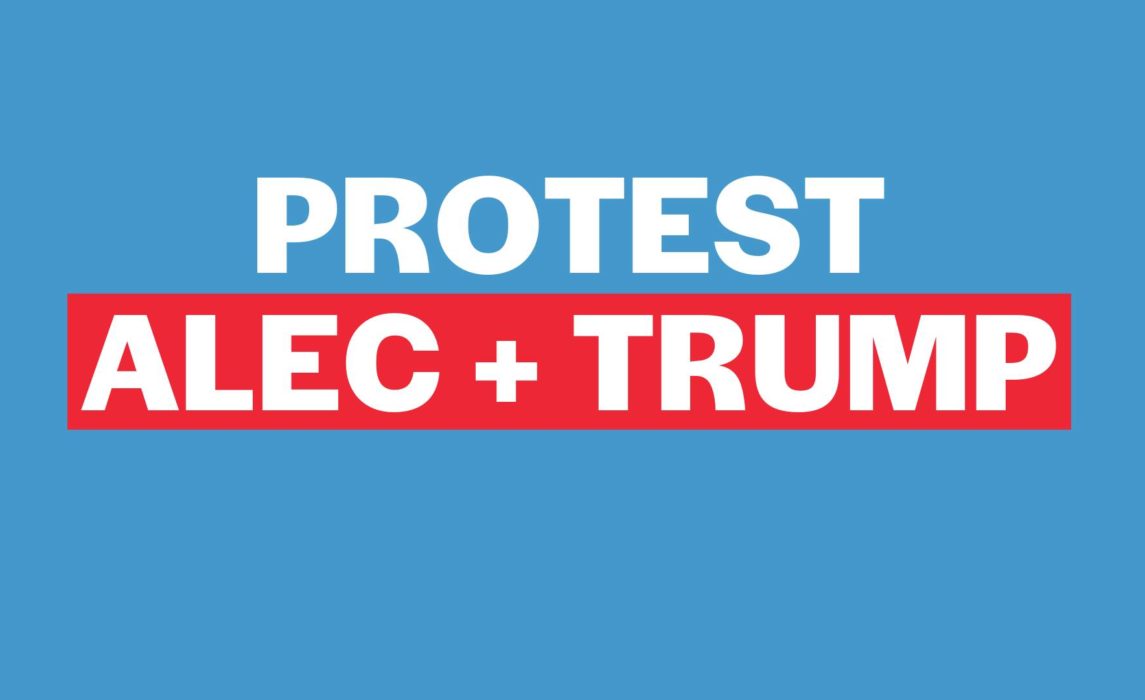 While most Americans believe our elected leaders are not listening to us, their constituents, or setting legislative agendas based on the people’s issue priorities, some wealthy special interest groups are able to use their power and wealth to influence our government.

Take, for instance, the American Legislative Exchange Council (ALEC), a group that brings corporate lobbyists and state lawmakers together behind closed doors to draft and adopt “model” bills that legislators introduce in their state. ALEC puts corporations and state legislators on equal footing when crafting these model bills. Did you vote for anyone at AT&T to decide what legislation your state legislature should promote?

And that’s not the most egregious way they undermine our democracy.

ALEC is turning 45 this year and has a long history of pushing an extreme agenda that includes such anti-democracy measures as limiting or eliminating the people’s right to protest, laws that manipulate our elections by placing barriers between millions of Americans and their right to vote. They oppose independent redistricting commissions saying that gerrymandering is legal and redistricting can only be done by state legislatures. The Supreme Court thinks differently. ALEC opposes disclosure laws for political contributions and opposes shareholder rights groups who would like to see more transparency about political giving from the corporations they own stock in.

In addition to their efforts to undermine our democracy, their model legislation includes the so-called “stand your ground” laws that have been responsible for the deaths of innocent people like Trayvon Martin and others. They favor restricting access to affordable healthcare, casting doubt on the science of climate change, attacking workers’ rights, and creating a tax system where the wealthy few benefit the most.

Most of ALEC’s agenda exists to benefit its corporate sponsors. In addition to doing its corporate bidding in secret, ALEC is registered with the IRS as a charity, meaning its corporate funders can get a tax deduction for their funding of ALEC’s lobbying. That’s right, America’s richest corporations get generous tax breaks for undermining our democracy for what is obviously pure lobbying activities with state legislators. Common Cause filed an IRS whistleblower complaint against ALEC, charging the group with tax fraud. The case continues to work its way through agency review.

ALEC is celebrating its 45th anniversary with a gala at the Trump International Hotel in Washington, DC tonight. Since President Trump refused to divest from his businesses when he became president, he still profits off groups like ALEC who have events at his hotels and golf courses. And as a corporate lobbying group, ALEC is no doubt seeking to influence the Trump administration. One court thinks there is enough to allow a case against the president on the emoluments clause in the Constitution (a prohibition on presidents or administration officials accepting gifts, money, offices or titles from foreign governments) to proceed.

This is about as blatant an example of pay-to-play politics as you are likely to see. ALEC lines Trump’s pockets by having their gala at his hotel tonight, and the Trump administration brings bigwigs from ALEC to the White House for a private policy briefing with top administration officials during the day. Quid, meet quo, or at the very least, “its appearance” as Chief Justice John Roberts wrote in McCutcheon v FEC.

It doesn’t have to be this way.

We the people can choose to strengthen our democracy, not undermine it as ALEC does. Join Common Cause and our allies tonight outside of Trump International Hotel when the corporate lobbyists will be strolling into ALEC’s gala. Please let your friends know you are attending the rally and share the invite on your social media networks.

And we can also help friends make sure they will be able to have their say with these handy voting tools – laws have changed in many states, make sure everyone you know is verifying their registration. We can take responsibility and verify we are registered to vote right now so we don’t get turned away at the polls, we can help register friends and family that may have moved, married, or changed their name. If we know people who will be traveling during the voting period in our states, we can remind them to get absentee ballots.

Join Common Cause and our allies tonight outside of Trump’s hotel when the corporate lobbyists will be strolling into ALEC’s gala. Please sign up to attend and urge others to as well by sharing on your social media networks.

Help Welcome Formerly Incarcerated Individuals Back to the Voting Booth