Alexandria Ocasio-Cortez beat a 19-year incumbent in the biggest political upset of 2018. 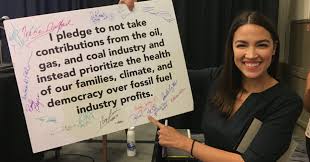 The next time someone tells you that nothing in American politics beats the power of big money, ask if they’ve ever heard of Alexandria Ocasio-Cortez.

A 28-year-old political novice from the Bronx, Ocasio-Cortez on Tuesday took down 10-term Rep. Joe Crowley, a pillar of the Democratic Party establishment who was widely seen by other party leaders as a potential speaker of the House.

Ocasio-Cortez won handily after a primary campaign built on her determined effort to build a personal connection with her working-class, minority-majority district and fueled by the support of small-dollar donors; nearly 70 percent of her campaign money came from individual contributions of less than $200, The New York Times reported.

She summed up her unlikely campaign in a biographical video that never mentioned Crowley but in which she asserted that a congressman “who doesn’t send his kids to our schools, doesn’t drink our water or breathe our air, cannot possibly represent us.” The message, and her advocacy of progressive positions including Medicare for All, clearly resonated in the Bronx/Queens district.

Ocasio-Cortez’s victory was the first defeat this year of a House Democratic incumbent; it quickly drew comparisons to a similar Republican upheaval in 2014, when then-House Majority Leader Eric Cantor lost his central Virginia seat to fellow Republican Dave Brat.

Ocasio-Cortez and Brat could hardly be more different philosophically. She describes herself as a Democratic Socialist; he came up through the Tea Party. But each challenged a veteran incumbent who had fallen out of touch with his core constituents – urban, progressive Democrats in Crowley’s case and suburban/rural conservative Republicans in Cantor’s. Each also ran as an anti-establishment insurgent, building their majorities with the help of grassroots activists and small-dollar contributions rather than relying on traditional and corporate donors.

See More: Campaign FinanceCitizen Funded ElectionsLimits on the Influence of Money In Politics

When Newspapers Close and Coverage Declines, Democracy Suffers Too