He is a Common Cause volunteer from Kailua-Kona, Hawaii Island. He has been integral in submitting testimony in support of, or in opposition to, bills when a Call to Action goes out. Tlaloc explains: 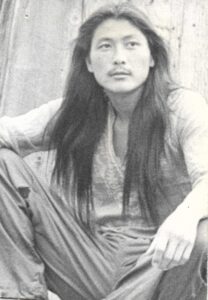 My mother was born in Seattle, and father was born in California. I was born in Cleveland, Ohio. The reason I was born there was because my mother didn’t want me to be born in a concentration camp. You see, she was one of 120,000 Japanese Americans (JA) who were taken from their west coast homes, businesses and farms and sent to different camps in god- forsaken places.

Many JAs spent their four years there – some, like my mother, could go east and get out a year earlier. My father luckily wasn’t in any of the camps, for he was in the 442 – an all-JA combat battalion.

Antidotal research found that more than 95% of those interned didn’t speak of their experiences to their children, and when they did, they made it sound like a summer camp. Why did they not talk about it?  They were ashamed, thinking they must have done something wrong. Their only crime was the slant of their eyes! Did the German and Italian Americans go en masse to “Camps”?   Institutional racism is alive and well in America! People of color and the poor always get the short end of the stick.

I was fortunate to have been a youth during the 60s-70s where Women’s Lib, the Peace Movement (stopping the War in Nam), the Environment movement, Black Power, Yellow Power, and Brown Power were all flexing their collective muscles and voices for the common cause of strengthening public participation in government; curbing the excess influence of money in politics; and ensuring that government serves the common good, rather than special interests. We were all trying to change the status quo; we saw many battles, with some wins. Those small or big wins made us feel that change was possible.

Sixty years on, I’m an armchair E-activist, belonging to many E-groups who try to make change via different campaigns, contacting our reps, senators, president, government and lending agencies.

Adopting a Road for Common Cause Maryland!