The Atlantic noted it immediately, the rest of the media world is catching up after Rachel Maddow raised concerns last night that one week later the White House has not corrected the official transcript of the Putin-Trump news conference in Helsinki to include Jeff Mason's full question. 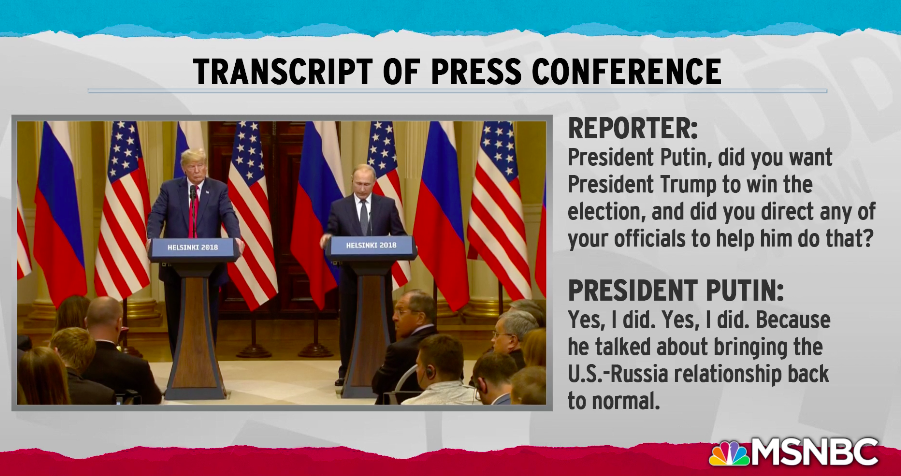 The dissection of body language and parsing of every word from the Putin-Trump news conference in Helsinki continues more than a week later.  Giving credit where it’s due, the fact the White House official transcript  did not include the question Putin was aked was first noted by The Atlantic:

Understanding what Putin said depends on what you watch or where you look. If you watch the video of the news conference provided by the Russian government, or by news outlets such as PBS and the Associated Press, you will hear the Reuters reporter Jeff Mason ask a bombshell of a question: “President Putin, did you want President Trump to win the election and did you direct any of your officials to help him do that?”

Putin then responds with a bombshell of an answer, according to the English translation of his remarks that was broadcast during the press conference: “Yes, I did. Yes, I did. Because he talked about bringing the U.S.-Russia relationship back to normal.”

“Normal,” to Putin, means restoring Russia to its superpower status despite its economic weakness. “Normal” for most White House staff when it comes to tapes and transcripts is no deletions and Sarah Huckabee Sanders hasn’t blamed the ghost of Rose Mary Woods, yet.

Mashable points out that some 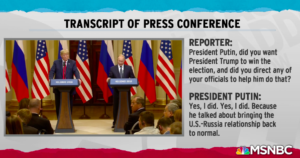 of the sound is garbled making it arguable that the White House transcript reflects that fact and didn’t capture the question the rest of the world heard.

That might have been plausible on day one after Helsinki, but more than one week later, the omission seems all too convenient. Rachel Maddow lays out the case why the White House had every reason to leave the question out of the official transcript  and why that should concern all Americans.