Jon Sinton is a media entrepreneur working in radio, television, and online industries. He serves on the advisory board for Common Cause Georgia. Photo Credit: Lorraine Mirabella/The Baltimore Sun 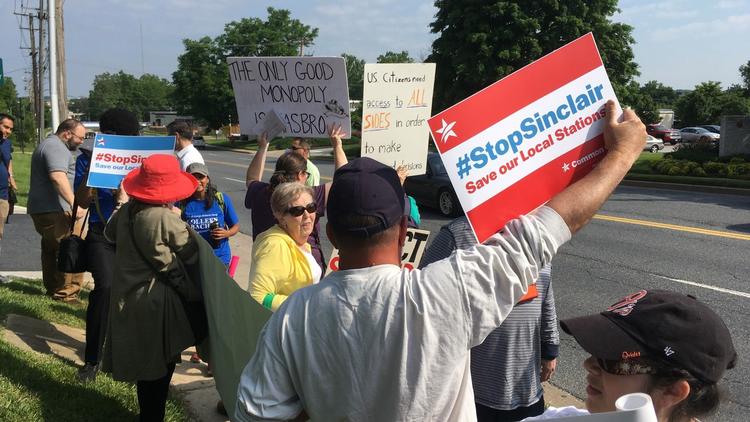 Sinclair, the owner of more television stations in America than any other operator, is close to approval of a deal to buy a bunch of major market television stations from the once-great newspaper, radio, and TV company, Tribune. If (when) approved, Sinclair will have “penetration” into 72% of homes in the USA, a previously illegal “share-of-voice.” They have found a soul mate in Ajit Pai, the Republican chairman of the regulatory agency, the Federal Communications Commission. Mr. Pai has bent over backward to accommodate this ideological takeover of our community asset, the electromagnetic spectrum. It’s what carries broadcast signals from station towers to our homes (but mostly to cable company “head-ends,” a distinction that has great import as we’ll demonstrate in a second).

A short history of broadcast regulation—it’s not boring or complicated. Observe: recognizing the importance of local news and diversity in the voices that bring it to our living rooms, the federal government long ago set inviolable ownership caps that kept operators from having more than seven stations per ”service,” that is to say AM, FM, and TV. A grand total of twenty-one stations was all anybody could own and no more than one of each per market. There was more regulation still: unless grandfathered in, newspaper owners couldn’t buy local broadcast stations. That’s how serious we were about protecting share-of-voice from being controlled by too few entities.

The regs were appropriate and necessary until the rise of the second generation of broadcasting—the cable revolution—when, suddenly, viewers’ choices went from three or four local stations everywhere outside the top ten to a slate of hundreds of cable channels, delivered by an unregulated wire to the home. When challenged by all this competition, broadcasters set out to change the rules and tried to tilt the playing field back in their direction. They were successful in fits and starts beginning in the early Nineties with duopoly rules that allowed them to own two stations per service in certain big markets.  The Telecommunications Act of 1996 really loosened the rules by raising ownership caps (which were later, for all intents and purposes, abandoned).

Still, recognizing the importance of independent local news sources, the FCC continued to enforce some caps in the world of television. No single operator was allowed access to more than 39% of American households. Industry was dissatisfied with that number and argued that because UHF stations (channels 13 and up) had significantly smaller broadcast areas than their VHF competitors (channels 2-12), there should be a “UHF Discount” that allowed more ownership of these signal-disadvantaged stations. All well and good until the Nineties when the Commission acknowledged the obvious: cable penetration was in the high ninety-percent range and signal strength no longer mattered since, under the “Must-Carry” rules, cable operators had to deliver all licensed television stations in the same market. We thought that ended the UHF Discount, but Chairman Pai, with a little nudge from his friends at Sinclair, capriciously decided to ignore existing policy and reinstated the obsolete UHF Discount specifically to allow Sinclair to buy Tribune and achieve the aforementioned 72% penetration of U.S. HUT.

Okay, I lied, it was boring and arcane, but, history lesson over.

This blatantly political move—there’s no way the Republican-controlled FCC would reinvoke the UHF Discount for a Democratic operator—was meant to give one voice unprecedented control over our mutually owned airwaves. Here are two not-so-subtle examples of Sinclair’s politics. On Memorial Day a few years ago it refused to carry Nightline on its forty-one ABC affiliates because Ted Kopple was going to read the names of our service members killed in Iraq and Afghanistan. Reading the names of the fallen just seemed, well, too liberal to Sinclair CEO David. If your eyebrows are now raised in disbelief, welcome to the club. That’s a doozy. Another example happened earlier this year when corporate dictated that its local stations nationwide had to read a Trumped-up (pun intended) editorial statement about fake news. This angered Sinclair’s local journalists and illustrated how easily local news could be controlled by a single entity. It was a clear, and completely ignored warning.

The Road to Unfreedom author, Timothy Snyder, a historian at Yale, makes the important observation that Vladimir Putin’s strategy in Russia has been to eliminate independent local voices in media in favor of his hand-picked oligarchs. Mr. Snyder’s thesis is that when people lose access to trusted independent local news, they grow suspicious about the motivations of the strangers in their living room, specifically, the national, government-parroting media. One need only look at polling numbers on Americans’ current disregard for media to see that it’s already happening here.

In league with a partisan, the FCC is on the verge of allowing, for the first time in history, one owner to control local news from a geographically removed, central office. The cognitive dissonance necessary to make these regulatory moves will induce whiplash. If your argument against ownership caps is that there is such robust competitive environment, what with hundreds of cable competitors on the same playing field as local TV, that you need to let the free market play out, how can you simultaneously argue the UHF discount is once again a necessary hedge against cable?

We’ve entered the third wave of television. First, it was broadcast, and we imposed limits to ensure a broad range of opinions, primarily local, were available to viewers. Then we had cable, which mitigated the power of broadcast by bringing many new voices into the home. Now we have Internet Protocol (IP) which goes over the top of even cable to allow viewers to put essentially anything on the internet on their TV and mobile device screens.

Still, over ninety percent of Americans use over-the-air radio and television every week. We must decide whether the FCC should be in the business of willfully awarding huge amounts of spectrum to any one player and whether the government gets to pick winners and losers in the local news arena.

'I've been preparing my whole life'