07.14.2020 / By Claudia Malloy, former Director of Grassroots Lobbying at Common Cause

Marguerite C. Rawdon Smith, died on July 1, 2020, two days after her 100th birthday. She lived a full life and passed peacefully at home. Marguerite was a Washington Connection Volunteer at Common Cause in the 1990s and 2000s during the fight for comprehensive campaign finance reform. As with so many of the volunteers, she was a lifelong tenacious advocate for ethical and accountable government.

Marguerite was an enthusiastic and lovely person who was up for most anything. I still remember meeting her at a Common Cause Washington Connect volunteer recruitment day. At the time we were working to generate support in the U.S. Senate for the McCain-Feingold bill. Republican Senator Nancy Kassebaum of Kansas was a moderate and key vote. The grassroots team needed a volunteer on the Kansas Desk. When I asked Marguerite if she would be the Kansas Desk Volunteer, she got this big smile on her face and said she knew nothing about Kansas but was up to the challenge!

As a grassroots organizer, Kansas was part of my territory and Marguerite was my lifeline when I traveled across the state. Marguerite recruited Common Cause members to meet me at coffee shops, in bank basements, and at libraries to hear how they could help make Kassebaum a champion for campaign finance reform. She enlisted activists to make phone calls, write letters, sign petitions, and submit letters to the editor. She helped to organize events in Overland Park, Topeka, Wichita, Salina, Manhattan, Lawrence, Hutchinson, and Dodge City. Marguerite made all this happen using spreadsheets, index cards, landlines, postcards, and fax machines. And it worked! Kassebaum voted the right way and became a champion for campaign finance reform.

From the beginning, Marguerite saw something in me and took my under her wing. She treated me to dinners at Washington, DC institutions and introduced me to experimental Russian theater. She regaled me with stories of her life and loves, and we always talked politics and current affairs. She was a tenacious reader and consumer of the arts. She gave of her time and money. She was a lover of nature and animals, and the dearest friend to many. I was lucky and am forever grateful to have had Marguerite’s love. 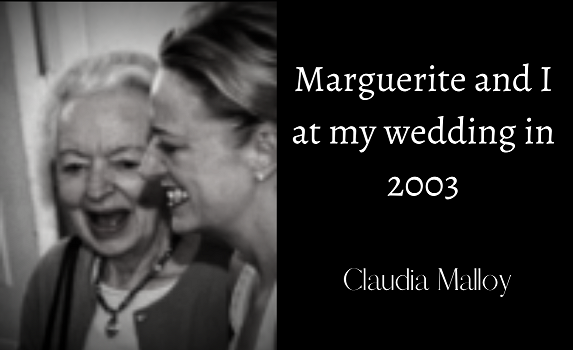 Being a Part of the Change I Want to See