Today Ohioans approved Issue 1 by an overwhelming margin. Voters took a stand in favor of transparency and fairness in the drawing of General Assembly districts and against using redistricting to manipulate elections for political advantage.

Prior to today’s historic victory, the Ohio Constitution allowed politicians to draw General Assembly districts for political advantage instead of ensuring fair representation. In 2011, map-makers labeled the hotel room where they drew maps in secret “the bunker” and used partisan information to draw as many districts as possible for their party. They even changed district lines for a major political donor. 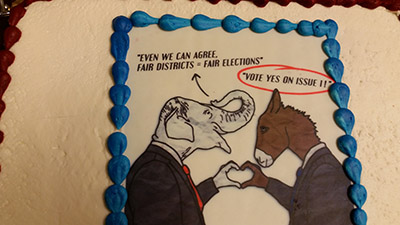 Today, voters rejected this sordid past and set Ohio democracy on a new path. Issue 1 will result in the following changes to the redistricting of General Assembly districts:

Now is the time to celebrate a huge victory for democracy, but our work is not finished. Issue 1 did not change how Ohio draws congressional districts, which are even more gerrymandered than General Assembly districts. Stay tuned as Common Cause Ohio works with our outstanding coalition partners to ensure that Ohioans have a voice when legislative districts at every level are drawn.