Issue 1, which changes Ohio's Constitution to require strong bipartisan support for changes to the state's congressional districts, rolled up a big vote in Tuesday's statewide balloting. 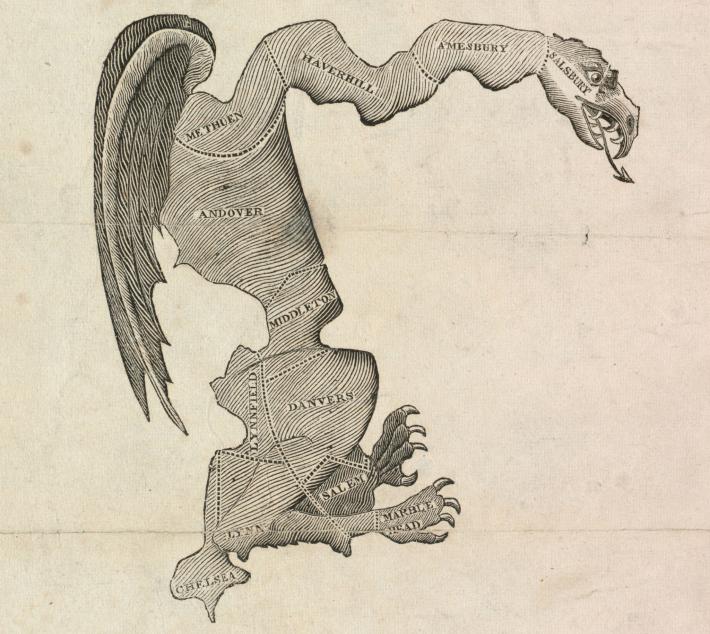 The original gerrymander, a Massachusetts district drawn in the early 1800s

Their state has long been considered America’s electoral bellweather, and tonight Ohioans signaled their determination to force a fundamental shift away from the extreme partisanship that marks contemporary politics.

By a resounding margin, Buckeye State voters approved a multi-layered redistricting reform plan crafted to thwart partisan gerrymanders. Issue 1, which is getting a 73 percent “yes” vote with about half of the precincts reporting, amends Ohio’s Constitution to require that a bipartisan supermajority of state legislators – or a new Ohio Redistricting Commission – approve changes to the state’s congressional districts.

“Tonight, Ohio voters sent a clear message to politicians and special interest groups across the country who continue to use partisan gerrymandering to rig voting maps by choosing their voters to maximize partisan political advantage,” said Common Cause President Karen Hobert Flynn.

“Redistricting reform is gaining momentum and Common Cause and its members have played a key role in passing a number of important reforms,” Hobert Flynn added. “Twenty-eighteen is going to be a historic year for redistricting reform, as Ohio is the first of several states expected to vote on ballot measures aimed at making the redistricting process more fair and transparent.”

The amendment gives the legislature the first chance to draw new districts after each decennial census. If legislators cannot muster the three-fifths majority the amendment requires to pass a redistricting plan – with at least a simple majority from the ranks of each political party – the job will fall to the Redistricting Commission.

The amendment was born of a years-long voter education and mobilization effort by Common Cause and other government reform organizations that subjected the highly partisan redistricting process to unprecedented public scrutiny. As public support for reform grew, lawmakers in both parties felt increasing pressure to come up with a bipartisan solution.

In 2015, aroused Ohio voters overwhelmingly approved a ballot measure revamping the redistricting process for state legislative districts; that added to the momentum for reform in drawing congressional districts.

“Ohioans never gave up on the fight to end to the manipulation of congressional districts for political advantage and today our efforts paid off,” said Catherine Turcer, executive director of Common Cause Ohio. “We are thrilled that the trans-partisan coalition of legislators, organizations, and individual Ohioans that Fair Districts = Fair Elections built has won an important victory for fair representation for every Ohioan.”

Primary Season Is Here and Our Elections Remain Vulnerable