‘I’ve been preparing my whole life’

As a bipartisan collection of senators reaffirms the continuing threat of Russian interference in our elections, the president insists the man behind those attacks is "fine." 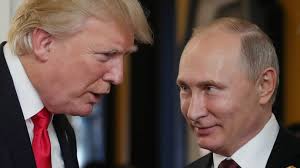 Vlad sizes up his mark and likes what he sees.

Two seemingly unrelated news items this week send another disturbing – but not at all surprising – message about the Trump administration’s cavalier attitude when it comes to the security of our elections.

The first story was largely unnoticed because it broke on Tuesday afternoon, as most of us were preparing to celebrate the 4th of July holiday. The Senate Intelligence Committee, Republicans and Democrats alike, delivered a unanimous vote of confidence in the finding of U.S. intelligence agencies that Russia mounted a deliberate and massive cyberattack on the 2016 election.

The agencies’ assessment “is a sound intelligence product,” the senators reported, and was produced by agents and analysts who were given a free hand by the Obama administration to go wherever the evidence led them. The senators added that everything the committee has learned about Russian activity since the assessment was released in January 2017 only strengthens the case that President Vladimir Putin ordered and carefully monitored the attack, which continues today.

Contrast that with President Trump’s repeated attacks on the intelligence community and his claims – direct and indirect – that its critical assessment of Russian activity was based on flimsy evidence ginned up by the Obama administration. Trump reports that Russian President Vladimir Putin denies any involvement and he seems to take Putin’s denials at face value.

That brings us to the second news item: the president’s speech on Thursday night at a political rally in Montana. There was plenty wrong with it: race-baiting attacks on Sen. Elizabeth Warren, D-MA, and Rep. Maxine Waters, D-CA; vicious jabs at former President George H.W. Bush and Sen. John McCain, R-AZ; and more hateful rhetoric about American reporters – despite last week’s shooting of five reporters and editors in a Maryland newsroom.

But what may have been most troubling, as Trump’s planned face-to-face meeting with Putin is now just 10 days away, was Trump’s scoffing at suggestions he may not be prepared to deal with a man who learned the ways of statecraft as an agent for the KGB, the Soviet intelligence service.

“You know what? Putin’s fine. He’s fine. We’re all fine. We’re people,” Trump declared. “Will I be prepared? Totally prepared. I’ve been preparing for this stuff my whole life.”

In addition to attempting to subvert American democracy, the Russian leader is almost certainly behind the attempted murder-by-poison earlier this year in London of a former Russian intelligence agent, British authorities report. There also are disturbing signs that the Russians engineered the killing in London this week of Nikolai Glushkov, a former Russian business executive. Putin has effectively taken down a democratically elected government in Ukraine and continues to prop up a corrupt and murderous regime in Syria.

So, we have a president who traffics in racist and hateful rhetoric about other elected officials, discounts and/or lies about the unanimous findings of his own intelligence agencies that a foreign power had meddled in and continues working to disrupt our elections, and provides a robust endorsement for the man behind those attacks and a variety of other outrages.

Congress earlier this year appropriated more than $300 million to help state election officials around the country defend against Russian and other attacks on registration and voting systems. It’s increasingly apparent that much, much more needs to be done and that Donald Trump is very, very unlikely to do it.

This is anything but fine. If Americans tolerate it, shame on us.

What Part of "Liberty and Justice for ALL" Don't People Understand?