The Illinois Supreme Court will decide whether voters can end the gerrymandering of the state’s General Assembly districts. The state’s highest court agreed to hear an expedited appeal following a trial court ruling removing Illinois’ Independent Map Amendment from the November ballot. The proposed ballot initiative would create an independent citizen commission with partisan balance to draw General Assembly districts after each decennial census. See the campaign’s first television commercial here. The Illinois Board of Elections certified that the campaign had sufficient signatures from citizens across the state, so this litigation is the only impediment to giving the people an opportunity to vote on this reform. 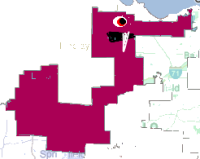 We are now awaiting a decision in Whitford v. Nichol, a landmark trial challenging badly gerrymandered Wisconsin Assembly districts. Common Cause’s 2015 Gerrymander Standard Writing Contest winners Michael D. McDonald and Robin Best discussed why the districts are so biased in the Washington Post’s Monkey Cage blog. The case is a test of the efficiency gap, a measure of partisan gerrymandering developed by Nicholas Stephanopoulos and Eric McGhee.

Tad Ottman, an aide to Senate Majority Leader Scott Fitzgerald, wrote the following to legislators during the redistricting process: “We have an opportunity and an obligation to draw these maps that Republicans haven’t had in decades.” Despite his apparent giddiness in 2011 about rigging districts for his party, Ottman testified at trial that he was merely describing that legislators had a duty to redistrict after the census. The previous day, another Fitzgerald aide testified that he met with only Assembly Republicans about the plan and consulted with no Democrats before it was rushed through the legislature nine days after it was proposed.

The National Gallery of Redistricting Art is the world’s first (we assume) online art gallery displaying artistic interpretations of the most strangely-shaped legislative districts in America. Prepare to be moved to tears by searing images such as Praying Chef and Alien Spawn. The gallery welcomes submissions from the public.

The Census Bureau released proposed rules that would leave in place, as the Prison Policy Initiative describes it, “the inaccurate and outdated practice of counting incarcerated persons as ‘residents’ of the prison location instead of their home communities.” As we detailed in a previous edition of the Gerrymander Gazette, counting incarcerated individuals in the community in which the prison is located unfairly skews population totals and denies fair representation to those who live in other districts. PPI provides information about this issue and submitting comments to the Census Bureau. The deadline for submitting comments is September 1.

Justice Kennedy, We Hear You

In 2004, U.S. Supreme Court Justice Anthony Kennedy wrote a concurring opinion in Vieth v. Jubelirer in which he affirmed that courts should hear challenges to redistricting maps on the grounds that they were drawn unfairly for partisan advantage. He upheld the Pennsylvania map at issue in that case, but said that a future case might fare better if plaintiffs proposed a judicially manageable standard that could be used to measure the severity of the gerrymander.

For the second year, Common Cause’s Gerrymander Standard Writing Competition encouraged the top legal and social science minds in the country to develop such a standard and they did not disappoint. Hopefully, litigators will take their theories out for a spin sometime soon. Here are the 2016 winners, whose papers will be published in Election Law Journal later this year:

2nd place – Samuel Wang, Princeton University
Three Practical Tests for Gerrymandering: Application to Maryland and Wisconsin
You can test some of Prof. Wang’s ideas at http://gerrymander.princeton.edu/.

Abstracts of the papers and more information about the contest is available at www.commoncause.org/gerrymanderstandard.

Texas and Wisconsin Federal Courts Step Up to Protect Voters

The Man Who Brought Us Citizens United is Back