Gallego Sits Down With the Interns

Gallego Sits Down With the Interns

Congressman Gallego is former Marine and a veteran of the Iraq War. He has represented Arizona’s 7th district since 2014. His voting record reflects his strong dedication to veterans issues. He has said he first became involved in politics due to his anger about the current state of military and veterans affairs in the U.S. Utilizing his educational background in International Relations from Harvard University, Gallego launched his political career.

First as a state representative, then a congressman representing large parts of Phoenix, Gallego has climbed the political ladder. He has been a strong advocate for progressive governmental reforms, and has worked on many pieces of legislation related to the work of Common Cause. He scored 14/18 on Common Cause’s 2016 Democracy Scorecard, better than nearly 400 of his colleagues. A vocal advocate for campaign finance reform, he co-sponsored H.R. 20, the “Government By the People Act,” which proposes a public financing system for congressional campaigns.

Unlike what one might expect from a busy representative (the congressman holds leadership positions in the Democratic, Progressive, Hispanic, and Equality caucuses and serves on seven committees) Gallego seemed genuinely interested in a substantive conversation with students. His enthusiasm may have grown out of our shared background  – Gallego was a Common Cause Massachusetts intern nearly two decades ago.

He answered a number of questions on his work in Congress, and some answers surprised us. Gallego said that while some members devote large amounts of time to raising money, that’s not a major part of his routine. He said he prefers to get in and out of his fundraising calls as quickly as possible, so that he can have more time to work on legislation and representing his constituents. 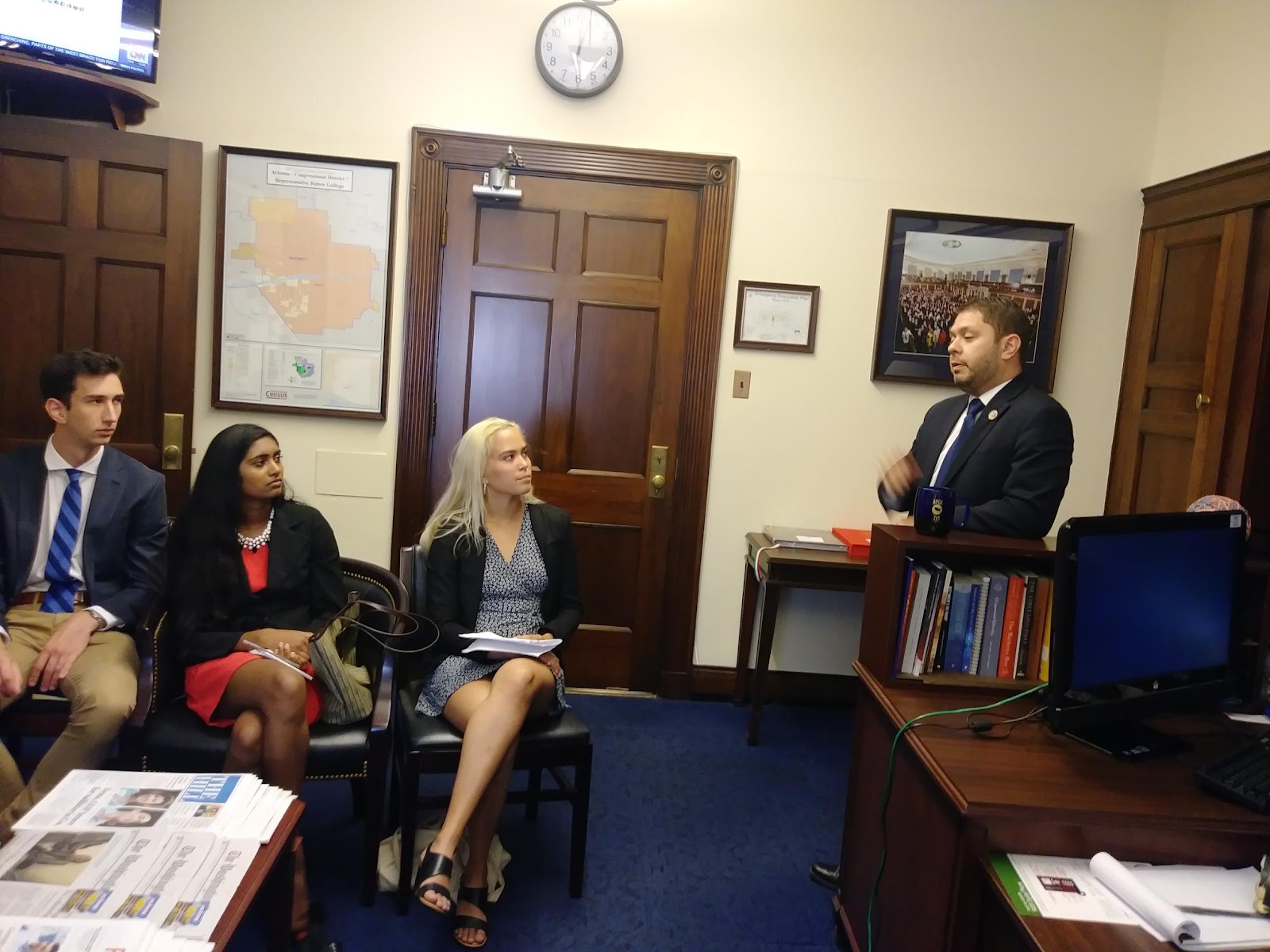 In response to a question about voter ID laws in Arizona, he said that some of the problems facing our electoral systems raise national security issues. He said that rather than taking this fight to the Arizona legislature, he plans to supercede them by pushing for a national all-mail ballot policy.. This strategy does away with the need for voter ID, and allows voters the ability to choose their representatives without waiting for hours in line.

Arizona has a strict, non-photo ID law, though it is not as extreme as the laws in Wisconsin and some other states. The Arizona legislature has a history  of efforts to disenfranchise voters at a massive scale.  Based on that, it seems likely that as the state’s demographics shift and the Latino population grows, the Republican-controlled government will make more efforts to restrict the franchise. On the plus side, prominent Arizonans like Gallego and Rep. Raul Grijalva, D-AZ, are setting a more positive example for democracy.

From our perspective as interns and students, the meeting was educational and left us with a better understanding of what it means to be a U.S. Representative. Congressman Gallego and his staff were welcoming, and we came away with excellent insights into the lives of our legislators.