Drinks on the White House

06.8.2017 / By Alex Cohen and Sruthi Palaniappan, Common Cause interns

Drinks on the White House

At bars and pubs across Washington this morning, an assortment of political junkies gathered around the flat screens to watch former FBI Director James Comey’s testimony to the Senate Intelligence Committee.

You wouldn’t expect a bar to be packed at 9:30 in the morning, especially not to watch a congressional hearing. But at bars and pubs across Washington this morning, an assortment of political junkies gathered around the flat screens to watch former FBI Director James Comey’s testimony to the Senate Intelligence Committee.

Shoulder-to-shoulder, with a mood evocative of the Super Bowl or the World Series, political junkies settled in for what some would consider the most high stakes congressional hearing in memory. 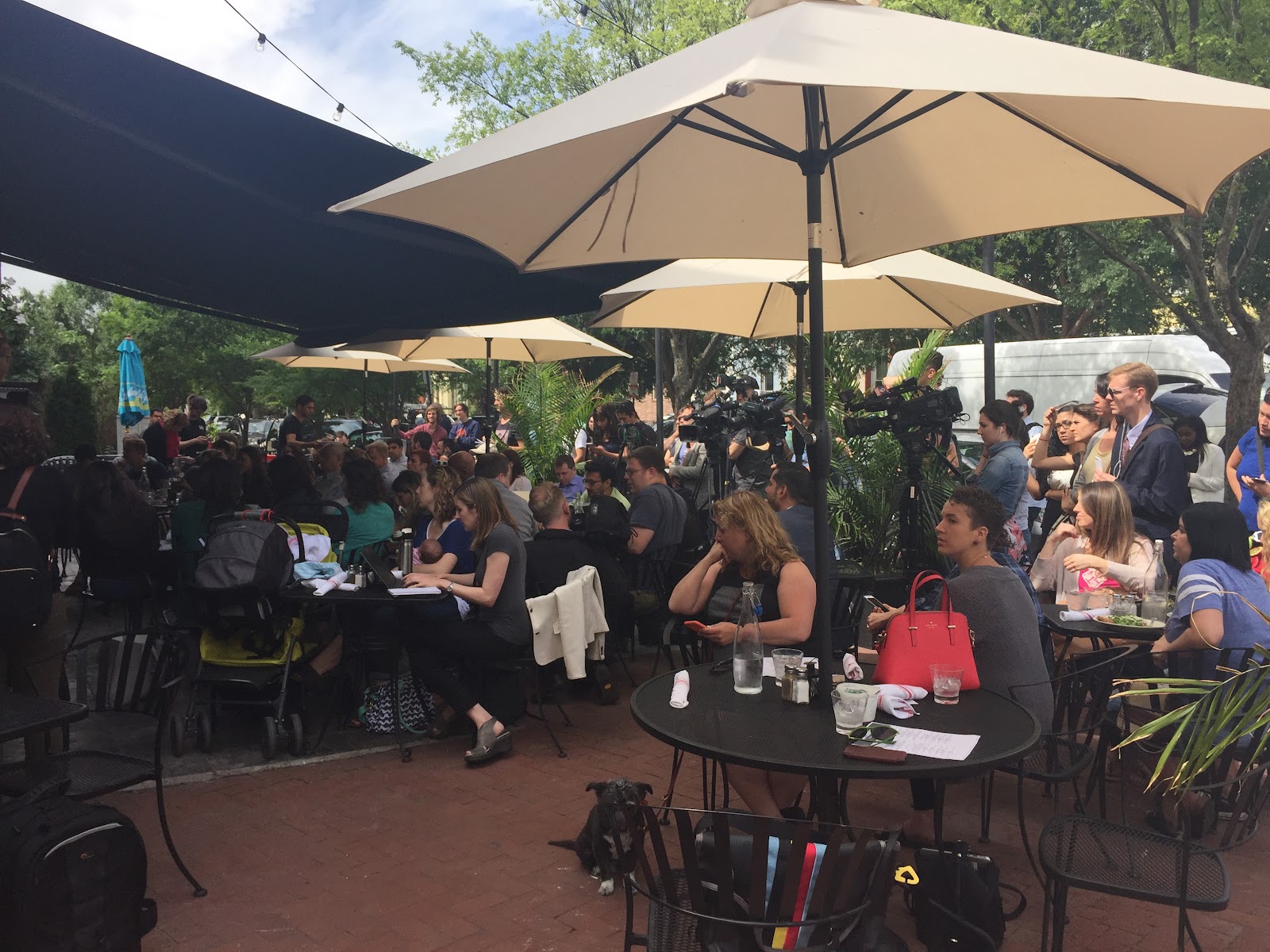 Mike and Joe, math teachers at a local high school and American University, respectively, equated the public’s anticipation of the Comey testimony with that surrounding the 1987 Oliver North hearing on the Iran-Contra scandal. Journalists in the crowd said they’d never seen anything like it.

The hearing was Comey’s first public appearance since he was abruptly fired by President Trump on May 9, a dismissal that has been repeatedly compared to President Nixon’s 1973 “Saturday Night Massacre.” The Watergate special prosecutor, Archibald Cox, fired that night later served as the chair of Common Cause’s National Governing Board from 1980-1992. 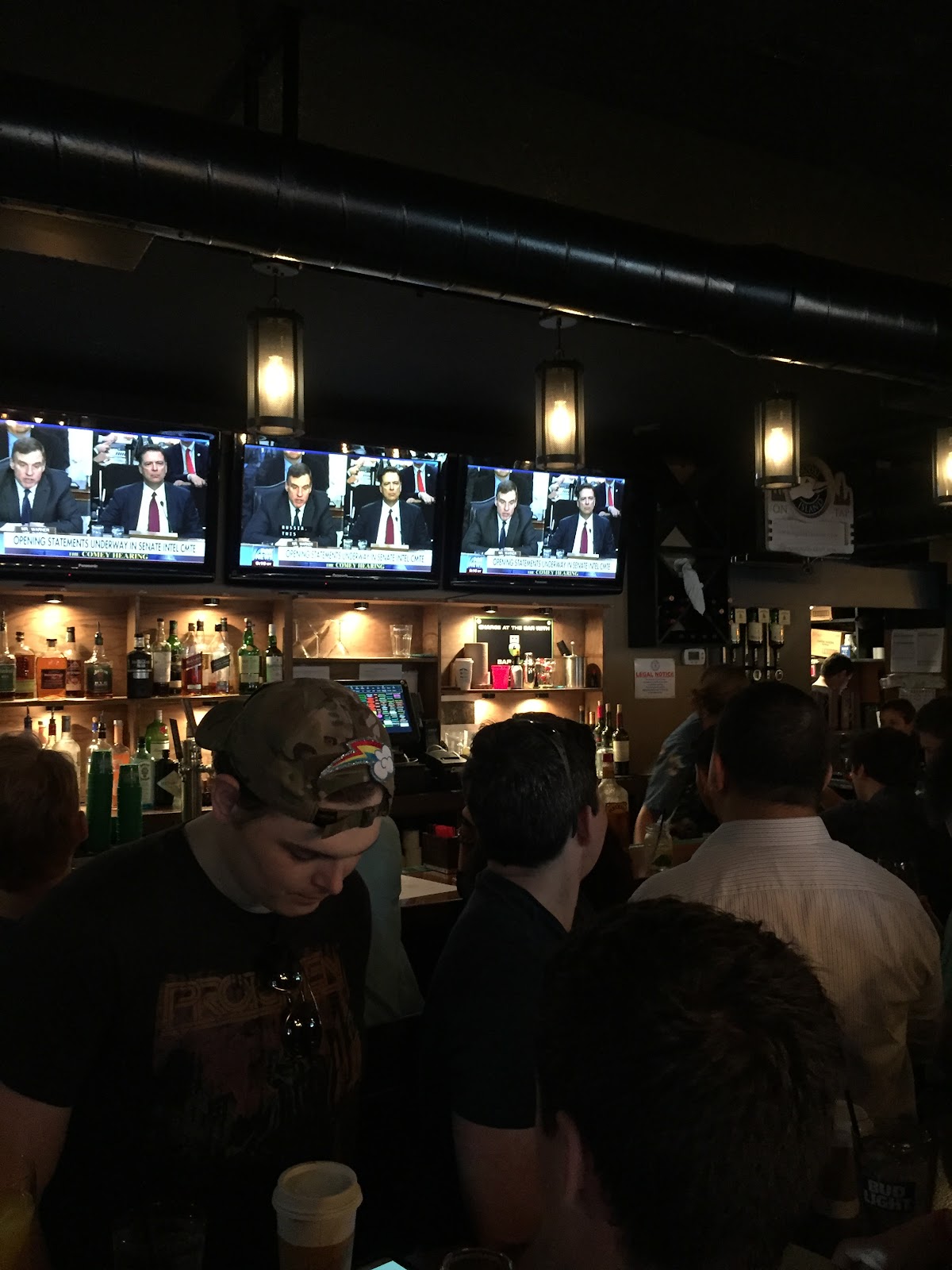 At Union Pub, a few blocks from the Capitol, it was standing room only for the Comey hearing.

At Union Pub on Massachusetts Ave, a short walk from the Capitol, patrons were drawn by the promise of a free round of drinks each time Trump tweeted during the testimony. Sadly, there were no tweets today from the president, although his son Eric unleashed a Twitter barrage against Comey;  Marc Kasowitz, the president’s personal attorney,  attacked Comey for “unilaterally and surreptitiously” leaking memos concerning private conversations with the president.

The volume in Union Pub went from raucous to nearly silent in a matter of seconds as Burr opened the hearing.  A bottle of champagne was popped open and a couple yelled “Cheers!,” but eyes were fixed on the TVs around the bar.  Shushing was frequent when people started talking among themselves. One person yelled “get to the questions!” as the introductions proceeded.

Many of those watching were sympathetic towards Comey. Sumner and Brianna, students in Baltimore, said they hoped Comey’s testimony would “clear the air” about the Trump campaign’s possible collusion with Russia. The former FBI Director had “a lot of heart,” they said.

“I love this man,” one woman was overheard saying to no one in particular.

Maha, a grad student at American University studying accounting, had never watched a political event at a bar before, but the Comey hearing was one she did not want to miss. Maha described the hearing as “intense,” but found Comey’s demeanor extremely professional and in control. She called Comey well-intentioned and genuinely concerned about helping people.

Emma, a D.C. resident who described herself as politically engaged, didn’t expect the testimony to draw such a crowd.  She said that she was impressed with Comey’s boldness in calling out Trump’s lies, but worried that people were approaching the hearing with inflated expectations.  She said that many viewers were hoping everything was going to be put out into the open, but were ignoring the realities of classified information.  “People forget that,” she said.

Several moments during the hearing were not well received.  When Sens. Burr, Roy Blunt, R-MO, and John McCain, R-AZ, brought up Comey’s role in last year’s Hillary Clinton email investigation, groans rippled through the audience. But there was laughter when Sen. Dianne Feinstein, D-CA, asked Comey if he believes Russia played a role in his firing. “Yes, because I’ve seen the president say so,” he deadpanned.

Comey’s testimony was, perhaps, overhyped. However, the acute interest in what he had to say is important. It demonstrates an extraordinary level of civic engagement among citizens of our nation’s capital, something on the rise across the country in marches, town hall meetings, and contact with representatives. The potential obstruction of justice detailed in Comey’s testimony is still to be fleshed out. A majority of Americans, according to polls, are concerned about the integrity of our electoral process and demand further transparency from our nation’s leaders.

Given the direction of the Trump Administration, it wouldn’t be surprising to see Union Pub, Shaw’s Tavern, and others holding more of these 10:00AM political parties, drinks on the White House.

Quote of the Day