On Constitution Day, Five Ways to Defend Our Democracy

On Constitution Day, Five Ways to Defend Our Democracy

September 17th is Constitution Day - here are five ways we can live up to the promise of our national charter. 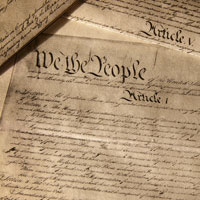 September 17th is Constitution Day – here are five ways we can live up to the promise of our national charter:

Supreme Court decisions that permit the wealthy to use their resources to drown out other voices violate the spirit of the First Amendment. That’s why we need Congress to pass the Democracy for All Amendment to roll back rulings like Citizens United & McCutcheon and restore sensible restrictions on political spending.

2. Defend Voting Rights For All

As long as qualified citizens are denied the right to vote, we can’t call ourselves a true democracy. That’s why we need to stamp out discrimination at the ballot box by restoring the Voting Rights Act and protecting every American’s right to vote.

3. Protect a Free and Independent Press

If a few mega-corporations control most of the news and information we consume, and independent voices are shut out, our press is not truly free. It’s the Federal Communication Commission’s job to preserve a vibrant and open information ecosystem, so the FCC must act to protect net neutrality and stop the Comcast-Time Warner Cable merger.

4. Restore Economic Opportunity For All

The economic gap between the top 1% and the rest of America has grown out of control while the middle class shrinks and struggles.  An economy that provides opportunity for all is essential to the justice, domestic tranquility and general welfare our Constitution was drafted to promote.

The Constitution created a system of government based on majority rule. But in the U.S. Senate, a minority has turned that principle upside down by using the  filibuster rule and its 60-vote supermajority requirement for action to block even routine legislation. Just this week, the rule was used to deny the Paycheck Fairness Act an up-or-down vote. We need to restore majority rule while protecting the minority’s right to be heard.