If we want to make sure Black and Brown lives matter in public policy, we have to ensure we equitably count people in the census — that includes counting incarcerated people in their homes instead of a temporary place of incarceration.

There is a real awakening happening right now about how mass incarceration has devastated Black and Brown communities and disenfranchised  millions of people from the ballot box and representation in government. Beginning with Jim Crow and apexing with the War on Drugs that began in the 70s, mass incarceration has taken the lives and livelihoods of people experiencing poverty, people with disabilities, and Black and Brown communities. This makes it harder, and oftentimes outright impossible, for these communities to make their voices heard in political discourse even though they are often the most impacted by government policies.

Prison gerrymandering– the act of counting people during the census at the location of the prison instead of their home — is especially sinister because not only are you silencing individual voices in government, you are in effect stealing representation from areas that are dramatically underserved while allocating that political power to whiter, more rural places that incarcerated people often have no connection to.

Earlier this month, the Census Bureau released a robust picture of how Black, Latinx, and Asian communities are growing and our nation is becoming more diverse than it’s ever been. Much of that growth is coming from metropolitan areas. However, with prison gerrymandering, those communities  will not be  fully represented.

The good news is many states are taking action to ensure rural, more white voting districts are not being artificially inflated.

Last decade, Maryland and New York were the only two states to end prison gerrymandering by counting incarcerated people at their last known address, instead of the location of the prison. Today, California, Colorado, Connecticut, Delaware, Illinois, Nevada, New Jersey, Virginia, Washington State, AND Pennsylvania, have joined New York and Maryland in their commitment to end prison gerrymandering!

Each of these states will have to take the following steps to implement an equitable solution to prison gerrymandering:

This fight is still ongoing and Common Cause and Prison Policy Initiative are here to help! If you are in a state that has not passed reform, there is still time!

Common Cause and Prison Policy Initiative have put together a resource to help states and advocates walk through the necessary steps in reallocating incarcerated people back to their home district.

Check it out here! 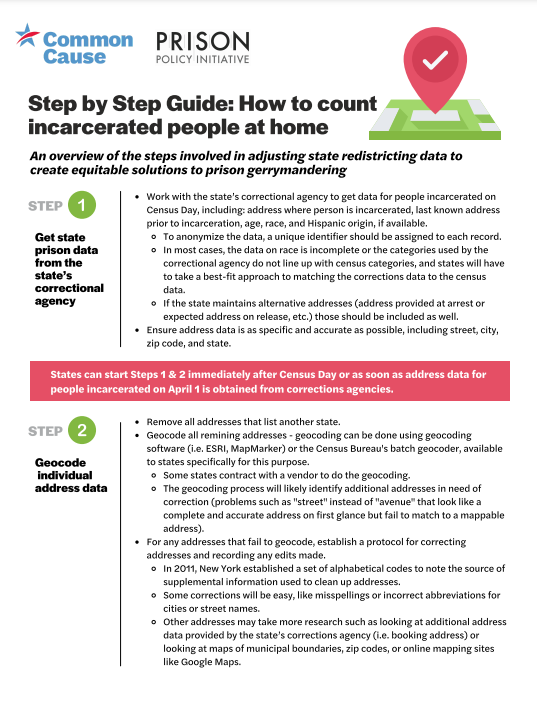 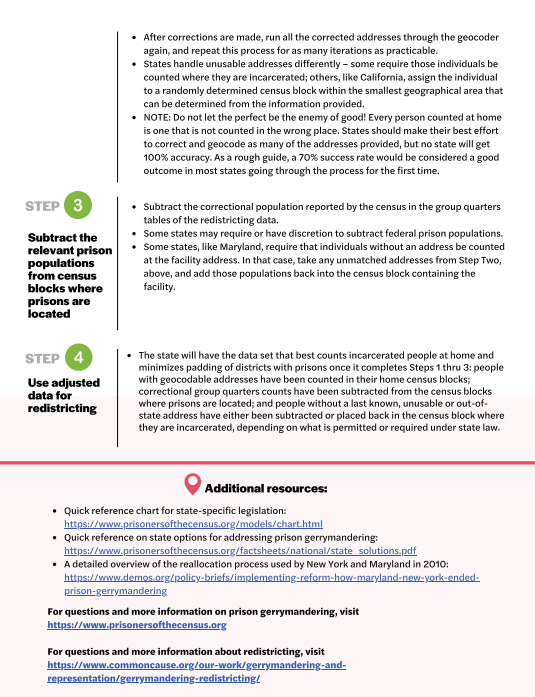