The people are clear even if one party in Congress is not -- a new poll shows only 29% approval of Barr. In a battle between Barr and the DOJ prosecutors who signed a letter calling him out for obstruction, the people agree with the prosecutors over Barr. This is a path he and President Trump have chosen. 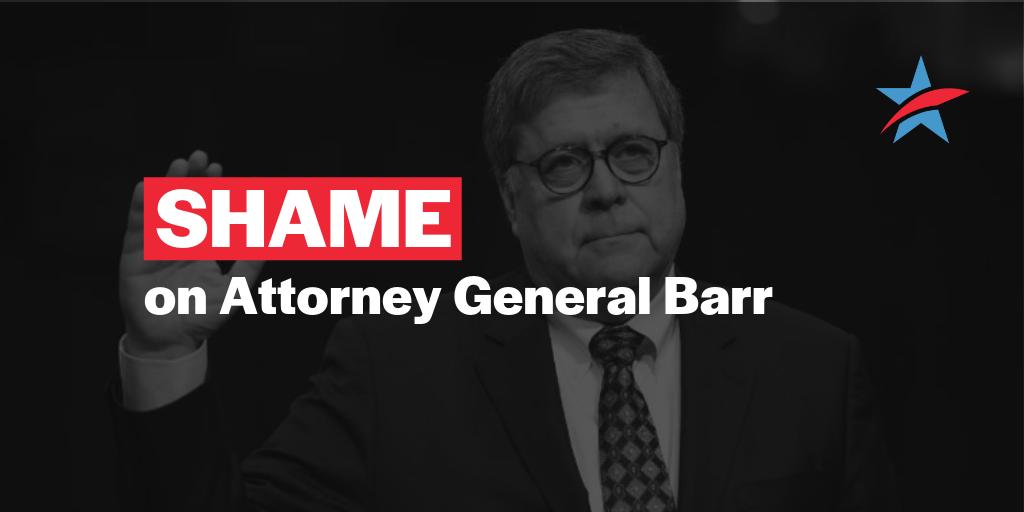 The House Judiciary has just voted to hold Attorney General Barr in contempt. He and President Trump chose this path. How did we get here?

We all watched the release of the Mueller report — at least Attorney General William Barr’s poorly abridged version — after two years of anticipation. Barr’s misleading summary created days of confusing headlines containing jargon such as: “not enough evidence to charge for obstruction, but unable to exonerate.” Barr inaccurately spun us with a four-page synopsis, and then, many weeks later, the American people finally received approximately 80 percent of the report, the rest redacted. The aftermath ended in the splintering of the legal community between a hand-picked Trump crony on one side and hundreds of career prosecutors on the other.

In his March 24 letter to both the House and Senate Committees on the Judiciary, Barr gave Trump a post-Mueller blessing. He concluded that the Mueller report casually said Trump did not collude with Russia and had not obstructed justice, whereas the report actually documented ten instances of possible obstruction and simply avoided the replete term collusion as it felt the word did not best characterize the reprehensible behavior and has no legal meaning. Mueller made sure to have his concerns heard, as he wrote, only a day after Barr’s summary, “the summary letter the Department sent to Congress and released to the public late in the afternoon of March 24 did not fully capture the context, nature, and substance of this Office’s work and conclusion.”

It turns out Special Counsel Robert Mueller is not the only one to take issue with the report. In fact, the people previously tasked with jobs similar to Barr’s overwhelmingly disagree with his seal of approval. At the time of publication, 735 former Justice Department prosecutors have signed on to a joint letter inquiring why Trump appears to be scot-free for now. In fact, Neal Katyal, the former acting solicitor general, imposed that “if this were anyone else but a sitting president, this person would be labeled a felon and staring down the barrel of a federal indictment.”

These Justice Department veterans numbered 300 at release Monday morning but the list continues snowballing. The list is composed of both Republicans and Democrats, men and women, attorneys and supervisors, prosecutors and senior officials serving every administration since Eisenhower’s more than 58 years ago. In stark contrast to the opinion of Trump’s czars, this open letter represents America more broadly. In its own words, “the offices in which we served were small, medium, and large; urban, suburban, and rural; and located in all parts of our country.” Trump believes he is above the law; this is why he appoints a cabinet that will bow down to him, offering only the answers and opinions he approves of. However, the rest of America is listening to the swaths of justice-pursuing veterans. Were Trump abiding by the rule of law, he’d be looking at criminal prosecution by now.

Barr’s duties, believe it or not, do not include defending the President. The work of the Attorney General is to work for the people (the President has the White House Counsel Office upon which to rely). So, in the well-worded title of Ian Bassin and Justin Florence’s op-ed from a week ago, “If William Barr is Trump’s lawyer, then who’s representing America?”

Trump finally uncovered an Attorney General who would do his bidding for him. In the words of Senator Mazie Hirono (D-HI), “Barr…sacrificed [his] once-decent reputations for the liar and grifter who sits in the Oval Office.” The Justice Department creates and directs OLC opinions from the top of its organizational chart; currently, that top dog is William Pelham Barr. It is no wonder why the Justice Department seems so languid in the pursuit of its department’s namesake with regards to the President when your leader is in cahoots with the president, indictments seem less essential. However, many people who spent their careers seeking the truth paint a very different picture of that department.

American political polarization has hit an all-time high, which means that having the American people arrive at even partial accord constitutes an accomplishment. However, in this case, the populace has decided — a new poll shows only 29% approval of Barr. In a battle between Barr and venerable prosecutors, an increasingly-divided America agrees with the prosecutors.

In truth, Mueller did not want the Justice Department to offer the indictments; rather, his report was designed to serve as a road map to Congressional investigation into the President with a possible conclusion of impeachment. However, the complete disregard of rule of law on the hands of Trump and his head honchos display an indifference for justice and disrespect for the people whom they allege to serve. In the Justice Department, there are two radically different views on the Mueller report: the one led by flimflammer-in-chief William Barr and the one constituted by the 735 lifelong public servants and trusted by the American people.