Get involved in pro-democracy campaigns in Delaware.

Local event, hosted by grassroots organizations, was one of 300+ nationwide

As the sun was setting on January 6, 2022, more than 200 Delawareans gathered in Sussex County to commemorate the anniversary of the attack on our nation’s Capitol while Congress was counting electoral college votes. The “Remembrance and Vigil” also called for action to strengthen and protect our country’s democracy. 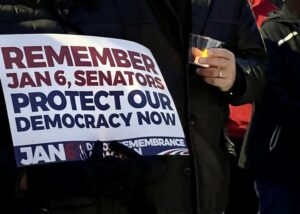 The event began with a short program, featuring the Rev. Heather Rion Starr, the pastor of Unitarian Universalists of Southern Delaware; Claire Snyder-Hall, Executive Director of Common Cause Delaware; Joe Lawson with the Southern Delaware Alliance for Racial Justice; and the Rev. Cathy Rion Starr, organizer for UU the Vote and Side with Love. At the end of the program, participants placed calls to Sens. Coons and Carper, asking them to reform the filibuster and pass the Freedom to Vote Act and the John Lewis Voting Rights Advancement Act. The event concluded with people walking with “candlelights” and a moment of silence.

“I stand here tonight to proclaim that in America, the voters decide the outcome of elections,” said Common Cause Executive Director Claire Snyder-Hall. “We should never forget that on Jan. 6th, 2021, MAGA militants stormed the US Capitol in a deadly attempt to overturn the will of the people. Yet, in the face of this existential threat, I remain hopeful because I also remember the peaceful uprising of ‘We the People,’ who, at the end of 2020, mobilized all over the country to save our democracy from authoritarianism.”

“I remain hopeful,” Snyder-Hall said, “because Congress is on the brink of establishing bold national standards with the Freedom to Vote Act and the John Lewis Voting Rights Advancement Act, so that no matter where you live or what you look like, your vote will be counted.”

Susan Clifford from Seaford attended the vigil because she is concerned about the more than 440 anti-voter laws being considered across the country. “When we vote we can vote for what is in the best interest of all Americans, not what is best for us as individuals as all humanity is infinitely connected,” she said.

Debbie Woods from Rehoboth Beach said, “I’m glad President Biden forcefully called out the Big Lie in his speech. One party has been trying to govern since 2008, while the other has been bent on sabotage.”

Delaware’s Remembrance and Vigil was one of more 300 events hosted by local organizations across the country on January 6, 2022.

A video of event highlights is available here.

The event was sponsored by the Unitarian Universalists of Southern Delaware and held on its grounds in Lewes. Cosponsors included Common Cause Delaware, the Southern Delaware Alliance for Racial Justice, the League of Women Voters of Sussex County Delaware, Delaware Working Families Party, and Sierra Club Delaware Chapter.