Missouri: No on Amendment 3

Learn more about the campaign to defeat Amendment 3.

The Missouri General Assembly is ignoring the will of the voters by placing Amendment 3 on the 2020 general election ballot.

The scheme to draw districts based on total population was originally conceived by GOP gerrymandering mastermind Thomas Hofeller, who determined that it could be used to “advantage Republicans and non-Hispanic whites.”

How Does Clean Missouri Rein in Gerrymandering?

Amendment 1 strips the Missouri State Legislature of the power to draw its own districts and gives that power to a non-partisan state demographer. The state demographer would be required to draw districts that are “designed in a manner that achieves both partisan fairness and, secondarily, competitiveness.” The measure defines partisan fairness as meaning that parties can “translate their popular support into legislative representation with approximately equal efficiency” and competitiveness as legislative representation that is “substantially and similarly responsive to shifts in the electorate’s preferences.”

Who Draws the Maps?

See our graphic on this reform proposal.

The state-appointed nonpartisan state demographer is responsible for drawing new state legislative maps. The existing bipartisan politician commission may make changes to the proposed plan with a seven-tenths vote of approval. If no changes are made, the plan is approved.

How Will the Non-Partisan State Demographer be Selected?

State residents who have not served in a partisan, elected position for four years before their appointment may apply with the state auditor to serve as the non-partisan state demographer.

How Can the Public Participate in the Drawing of New Districts?

After the non-partisan state demographer proposes a legislative redistricting plan, the commission will hold a minimum of three public hearings where the public will be able to comment on the proposed plan.

What Are the Proposed Rules for Drawing Maps? 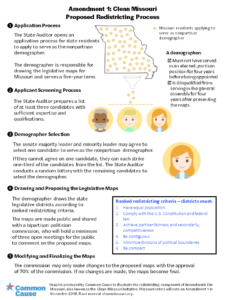